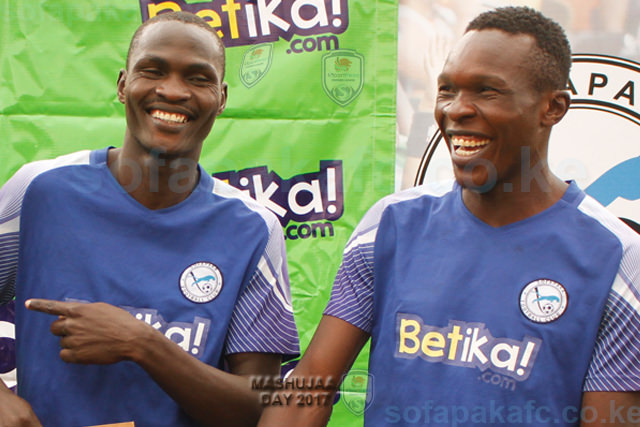 Sofapaka midfield dynamo Maurice Odipo has said the team is determined to risk life and limb to win their league match against Western Stima in Narok Stadium on Sunday.

The long-serving defensive midfielder said even a draw will be unacceptable as it may be a detriment to the team’s chances of winding up in the second position of the league whose potential titlists are Gor Mahia.

“We will be going to Narok with our guns blazing and shall be seeking for an outright win which is the golden rule in all the remaining fixtures. You see, we have been playing as a unit and are striving to exhibit good football while trying to avoid a loss or a draw in each of our remaining assignments.” said Odipo.

Added the midfield enforcer: ’’If we remain focused and conjure up descent results in the remaining fixtures, I’m pretty sure we will be primed for a second place finish. If you look at how we played against Bandari in Mombasa, I think what we ultimately want to achieve now is possible,”

Sofapaka are 11 points adrift of KPL leaders Gor Mahia and with an average of five matches remaining before the conclusion of the season, the best Batoto Ba Mungu can hope to achieve is a runner-up slot.

Buoyed by their latest 2-1 conquest over Bandari, Sofapaka will be seeking to take advantage of the nightmares that have befallen Western Stima this season to the extent of being on the brink of relegation from the top-tier league.

Stima are placed 15th in the 18-team league chart and a loss at the hands of Sofapaka will all but worsen their relegation worries.

For Western Stima, the magnitude of Sunday’s game at the sweltering heat of Narok is enormous and mind-boggling, to say the least.

This is because they are up against an inspired Sofapaka side whose coach Sam Ssimbwa received the KPL August 2017, coach of the month gong this week, besides boasting of arguably the hottest property in the ongoing league in form of talismanic striker Umaru Kasumba from Uganda.

Kasumba has thrust himself into the KPL spotlight by scoring goals almost at will and is easily one of Sofapaka players to watch in the Narok game,

To assist Kasumba in the goal-hunt is another Ugandan import Ale Feni alongside Kenyan Ezekiel Okare while the defense line is likely to rotate around Willis Ouma, Wesley Onguso, Rodgers Aloro and Jonathan Mugabi.

Much experienced Hillary Echesa is likely to hold strings in midfield with Mathias Kigonya deployed between the sticks to stop shots by Stima strikers.