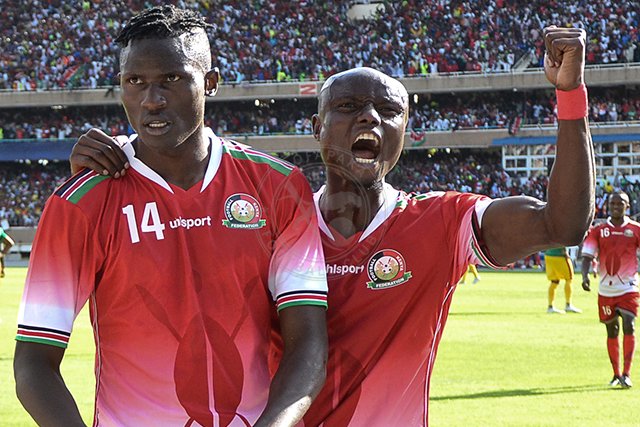 Sofapaka and Harambee Stars utility player Dennis Odhiambo has lauded the national team’s performance against Ethiopia after they beat the Walia Antelopes 3-0 in a thrilling 2019 Africa Cup of Nations Group F qualifier on Sunday, that has now put Kenya in the driving seat.
Odhiambo who played the entire 90 minutes in the match and many fans believed that he was the man-of-the match, said they played according to their strategy and could have increased the goal tally in front of a mammoth crowd at the Kasarani Stadium.
“We had a strategy for the two qualifying matches. In Addis Ababa we were more defensive and it worked well for us, in fact we were unlucky to pick maximum points there because we had a goal disallowed,” said Odhiambo.
He added: “Back in Kenya for the return leg, we were more offensive. We were not to concede any goal, but at the same time we had to score and get any type of a win. We did just that and we could have scored even more.”
Another Sofapaka player in the team, striker Pistone Mutamba was in the Stars squad but did not play part of the match.
Kenya currently lead Group F with seven points from four matches, followed by Ethiopia on four points from four matches, while Ghana and Sierra Leone are on three points from two matches.
The 2019 Afcon competition will be held in Cameroon in June next year.