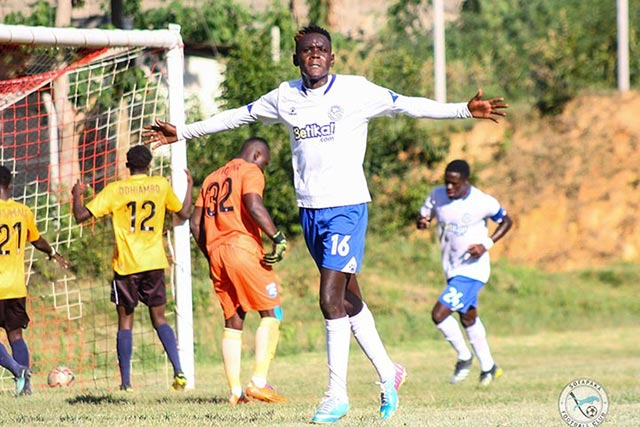 Sofapaka bounced back to winning ways after beating Afc Leopards 1-0 in an entertaining match in Wundanyi.

Joe Waithira’s first half was all important for Sofapaka as the team got back to winning ways after three winless outings.

Sofapaka kicked off the match on a pressing note in a quest to take an early lead. Alex Imbusia and Lawrence Juma linked up well before the latter’s powerful shot went over the bar.

Ten minutes into the match BatotoBaMungu came calling yet again, Joe Waithera dribbled past Joachim Olouch he then set through Alex Imbusia but Imbusia’s effort but had too much power for a goal kick.

At the quarter-hour mark, Sébastien Ikekhai almost gave the host the lead, the Nigerian pounced on Joe’s delivery, but his volley misses the target by inches.

At the half-hour mark, Leopards had their first change in goal, a long cross on the left flank landed on Marvin Nabwire, but the midfielder’s effort went into Odhiambo’s arms.

Ten minutes later, Odhiambo, making his debut, pulled a huge save to deny the visitors from taking the lead. The former Wazito man reacted on time to deny Peter Thiongo from close range.

A minute to the interval, Sofapaka broke the deadlock through Joe Waithera. The forward collected Said Tsuma’s delivery before hitting a low, hard shot past Opiyo in goal.

On resumption, the Leopards came close to level scores through Washington Munene. The midfielder’s header caused problems to Odhiambo, but the custodian was well-placed to cancel out the pressure.

On the hour mark Sofapaka came close to double their lead, Lawrence Juma’s volley deflected off Olouch for a goal kick.

Twenty minutes from time, the Leopards had another attack on goal through Eugune Mukhangula, the winger’s header went over the bar.

Against the run of play, Ambrose Sifuna almost doubled our lead, the midfielder dribbled into the Leopards penalty area, but his final touch hit the bar on the left side to go out for a goal kick.