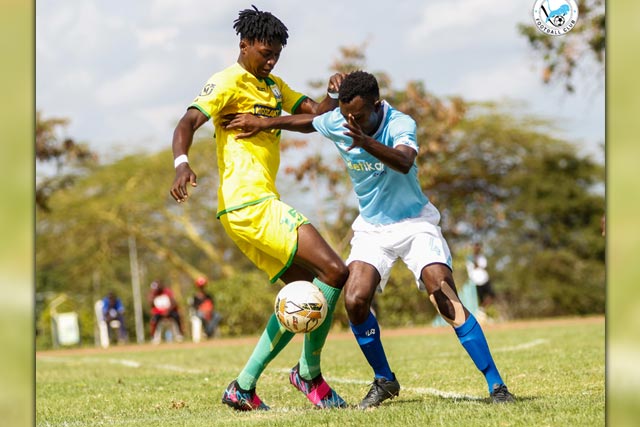 Sofapaka and Kakamega Homeboyz battled it out for a point each thanks to goals from David Odhiambo and Joe Waithira in each half.

In a match staged at the Kasarani Annex, Kakamega Homeboyz took an early lead, barely ten minutes into the match. The visitors, who were the better side in the opening minutes, took the lead in the 12th minute through David Odhiambo. The on-form forward collected a lost ball from Ambrose Sifuna before unleashing a powerful shot that flew past Fredrick Odhiambo for the opening goal.

At the quarter-hour, the visitors came close to doubling their lead through Yema Mwana. The former Bandari forward dribbled past Titus Achesa, but Fredrik Odhiambo reacted to clear out his attempt.

At the half-hour mark, Hansel Ochieng had another opportunity to equalize. The forward, after being set through by Achesa, hurriedly shot at goal, but his attempt went wide.

Five minutes before the break, a long ball by David Nshimirimana to Titus Achesa lifted in a beautiful delivery to Lawrence Juma, the captain, who flicked it on goal, but Oputi swiftly reacted to punch out his goal-bound attempt.

Upon resumption, Coach David Ouma made a double change, bringing on Joe Waithira and Alex Imbusia for Hansel Ochieng and Wilberforce Lugogo, which brought some life into Sofapaka’s attack.

Five minutes on, David Odhiambo came close to doubling Homeboyz’s lead, but Fredrick Odhiambo was well placed to pull off a huge save.

At the hour mark, Sofapaka had an attempt to level the scores through Joe Waithera. The striker dribbled into the opponents’ defense, but his final attempt hit the side net.

Twenty minutes from time, Nixon Omondi and Geoffrey Ojunga had a decent build up into the Homeboyz penalty area before the latter set up through Joe Waithera, but the forward failed to score past the keeper.

Ten minutes later, Joe Waithera restored parity, tapping in from a goalmouth melee after a poor clearance from the Homeboyz defense.

Against the run of play, Lawrence Juma volley hit the crossbar, offering a perfect chance to score the winner, but Nixon Omondi failed to control his touch into an empty net as the two teams settled for a point each.