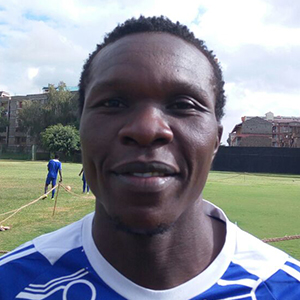 If a script was to be written about indefatigable and dedicated players at Kenyan Premier League (KPL) side Sofapaka, it would be pretty hard for Maurice Odipo’s name to miss out.
Odipo’s work-rate is excellent so much so that he has served for a lengthy period as the team’s skipper and has a penchant of leading by example with the results there for all to see.
In a nutshell, he is a quick, balanced, highly skilful and agile midfielder who any coach would wish to have in his squad.
Amongst Odipo’s  other attributes is that he possesses excellent ball control, and positioning is capable of beating defenders in one on one situations as well as creating space for teammates.
“He (Odipo) possesses great shots from any distance, has superb vision and is a dribbler per excellence,” said a Sofapaka fan after seeing Odipo play in a recent KPL match.
It is least surprising that the 29-year old has only three national team caps to his name besides having previous stints with some of the top clubs in the region most notably Gor Mahia, Tusker and Kampala City Council (KCC) of Uganda.
In his own words, discipline is key to making it big in the game and these are qualities he would wish to instill to the young breed of players who would wish to make football a career.
“You cannot make it in football without discipline. Follow your coaches advice and the rest shall fall in place. There are no two ways about it,” said Odipo.
A product of Jericho All Estate in Nairobi’s Eastlands which has produced some of Kenya’s finest footballers, Odipo who is a fan of Stoke City in the English Premier League said his ultimate dream is to help Sofapaka to the league title.
“At Sofapaka we are like a family and the players have the potential and resolve to win the league crown. It’s is very possible and we need to continue working hard in training to achieve that,” he said.
Odipo further said the newly-launched award scheme to players who excel in league matches will inspire them to perform even better in their quest to bag the league gong.
“I thank the Sofapaka management for this noble course in conjunction with official sponsors http://www.betika.com as it will go a long way in getting the best out of the players. This is no doubt the way to go,” said Odipo.