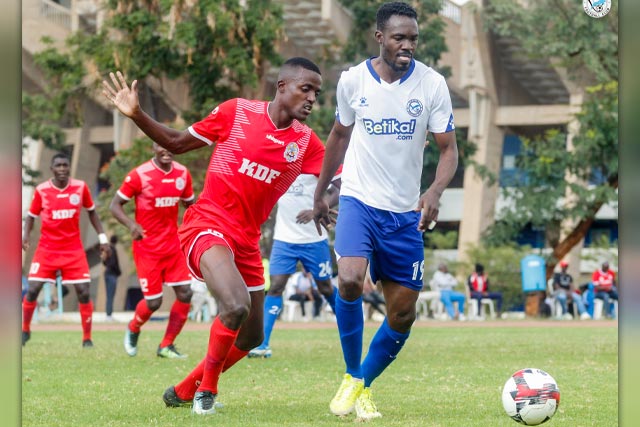 In the final match of the season, host Sofapaka hoped to make it three wins in a row, but their hopes were dealt a blow after Enos Ochieng’s 50th minute goal proved the difference in a closely fought match.

Sofapaka began the encounter as the hungrier side, coming close to scoring the opener in under five minutes of play after Joe Waithira worked his way into Ulinzi’s penalty area, but Boniface Onyango was rightly placed to cancel his goal bound attempt.

At the quarter-hour mark of play, the soldiers had an open chance to take the lead through Clinton Omondi. The forward collected Harun Mwale’s delivery from the right flank, but Titus Achesa reacted in time to clear Omondi’s attempt for a throw-ball.

Five minutes before the half-hour mark, Benard Nyangweso’s charges had a perfect opportunity to go ahead in the match through Clinton Omondi, but Titus Achesa made a quick reaction to make a goal line clearance.

Four minutes after the half – hour mark, Titus Achesa thought he had given Batoto Ba Mungu the lead, only for his efforts to end up hitting the crossbar.

Five minutes before the half time break, Roddy Manga and Lawrence Juma teamed up at Ulinzi Stars’ half, but the latter’s volley went into James Saruni’s arms in goal for the soldiers.

Five minutes after resumption, the visitors took the lead through Enos Ochieng. The striker won a loose ball off Geoffrey Ojunga’s feet before slotting past Simon Masaka to give the soldiers the lead in the match.

At the hour mark, Roddy Manga came close to leveling the scores, but the forward’s tap in from Sébastine Sunday’s pass had too much power going wide.

Twenty minutes from time, Nixon Omondi and Titus Achesa combined on the right flank. Achesa lifted in a teasing cross to Alex Imbusia, but Harun Mwale threw in his body to block Imbusia’s goal-bound header.

Against the run of play, a good delivery by Nixon Omondi to Roddy Manga, who in turn flicked to David Nshimirimana, but the defenders’ tap hit Brian Odiaga before a final catch by Saruni as the soldiers held on firmly for the win.