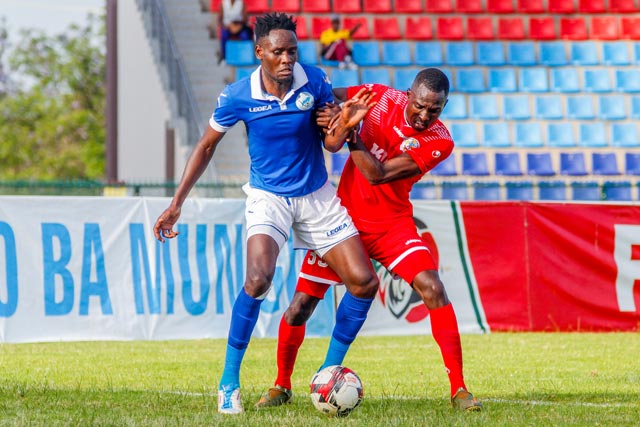 Enos Ochieng scored a last-minute goal to deny Sofapaka a maximum in round five of the FKF Premier League fixture.

In a match staged at Ulinzi Sports Complex, both teams had end-to-end action in a quest to get the three points. In the first quarter of the game, Sofapaka had the first sniff at goal through Davis Kasiyre; the forward collected Ambrose Sifuna’s delivery, but his touch went inches wide.

At the half-hour mark, Lucky Musyoki and Brain Wepo had a good combination on the right flank before the latter singled out Rody Manga, but the striker’s header missed the target by a whisker.

Five minutes later, Ulinzi came close to breaking the deadlock through Clinton Omondi. A quick counterattack initiated by Boniface Muchiri saw the midfielder set Omondi through, but Titus Achesa made a timely effort to clear the danger.

Five minutes before the breather, Ambrose Sifuna delivered a long ball to Rody Manga. The striker hit a great volley, but his effort went straight into the keeper’s arm.

At the stroke of halftime, Sofapaka were awarded a penalty after an Ulinzi defender was judged to have handled the ball in the penalty area. Davis Kasiyre made no mistakes from the spot to give us the lead at halftime.

On resumption, the hosts were the better side in the opening stages of the second half, throwing in attack after attack in search for the equalizer, but Sofapaka’s defense remained firm.

At the hour mark, Ambrose Sifuna made an explosive run into the soliders’ defense and took a hard shot, but his effort missed the target by a whisker.

Twenty minutes from time, Ulinzi almost leveled the scores through Benard Ongoma, but David Nshimirimana put his body on the line to deny the midfielder from a close range attempt.

Against the run of play, after a consistent push for the equalizer, Ulinzi finally got the equalizer after Rody Manga’s attempt to clear unlucky turned into his own net as the two teams settled for a point each.