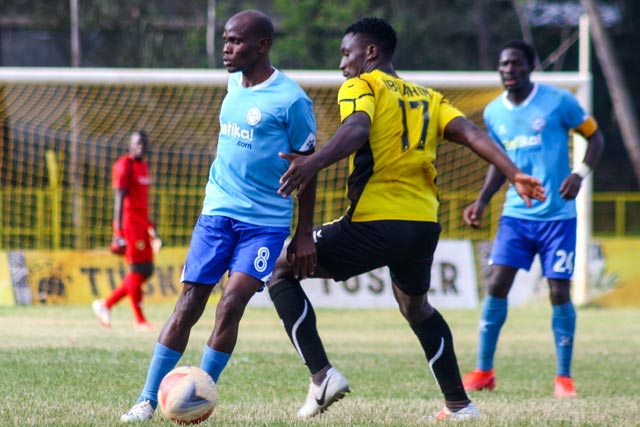 Tusker and Sofapaka played out to a barren draw in an entertaining match at the Ruaraka complex.

In round nine of the FKF Premier League fixture, Tusker began the match on a high tempo for an early opener, Boniface Muchiri dribbled past David Otieno but his final attempt had too much power rolling out for a goal kick.

At the quarter hour Sofapaka had the first opportunity of the match through Joe Waithira. The forward pounced on a loosely cleared ball but his effort missed the target from a close range

Ten minutes later, the host had another chance at goal, Daniel Sakari and Boniface Muchiri combined upfront but keeper Omondi was well-placed making the important save.

Five minutes after the half-hour mark, Lawrence Juma came close to put Sofapaka ahead but his volley missed the target with keeper Matasi off his line.

Five minutes before break, another goal-scoring opportunity to give BatotoBaMungu the lead went begging after Titus Achesa failed to tap in from Nixon Omondi’s teasing delivery.

On resumption, Sofapaka returned the more aggressive side upfront, David Otieno delivered a long ball to Joe Waithera, the forward in a quick reaction looped the ball past Matasi but his effort hit the crossbar much to the host’s relief

At the hour mark, the brewers had an open chance to take the lead, Apolo Otieno’s solo effort troubled Omondi, but the custodian was keen punching the ball out for safety.

Ten minutes later coach David Ouma made a double change, bringing on Hansel Ochieng and Alex Imbusia for Nixon Omondi and Joe Waithera to add strength at goal. Ouma’s move turned fruitful with more attack play upfront, Ochieng almost broke the stalemate but his effort was cleared off the line by skipper Asike.

Against the run of play, substitute John Njuguna almost pulled a last minute win for the host but Kevin Omondi reacted in time to save the danger as the two teams settled for a point each.