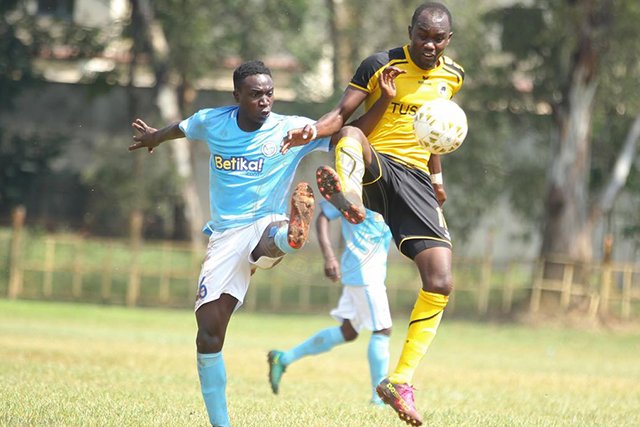 Kevin Kimani’s header gave John Baraza the lead before a battling performance saw Tusker turn the tie back on their advantage.

The clash took to time to settle and had the goal flowing in the first half with Kimani sparking the first of three goals in a thrilling first half.

The former MVP nodded the visitors to the 37 minute lead against his former side.

Two minutes later Tusker went 2-1 up as Otieno turned provider for David Juma to see Tusker turn the tie on its head.

John Baraza’s charges proved equal to the responsibility of chasing the game as a they pitched camp at Tusker goal in search of the leveler.

It’s Tusker who came close to a third as Otieno hit Mathias Kigonya’s upright after a neat interplay with Muchiri.

Their best chance saw Matasi on hand to tip over a Stephen Waruru’s header with 12 minutes left.

A collision of head between Faraj Ominde and Michael Oduor saw the tie delayed late on but Tusker head our for the win, moving up to eight in process.

Justin Micho had a late chance to snatch a point but dragged a shot wide under a heavy challenge from Matasi as Tusker held out to win. The victory moves Brewers two ranks up to eighth on the pile.