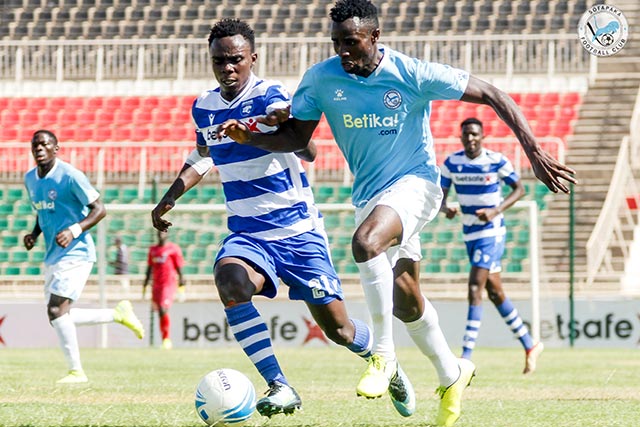 Goals in either half by Lawrence Juma and Dan Musimali were the difference as Sofapaka and AFC Leopards shared the spoils at Nyayo National Stadium.

The opening minutes of the game witnessed a beautiful display with both sides hungry to break the deadlock, but none was to show for it after ten minutes of play.

After a continuous push on goal, Sofapaka took the lead ten minutes later through Lawrence Juma. The captain sneaked through to head in Said Tsuma’s corner kick delivery past Muchesa Maxwell.

At the half-hour mark, Sofapaka had another chance to score when Roy Okal collected a lost ball from keeper Maxwell Muchesa and set a low pass to Alex Imbusia, who shot hard on goal but was intercepted by Robert Mudeny.

Five minutes before the break, the host leveled the scores through Dan Musamali. The midfielder headed in Washington Munene’s delivery past Kevin Omondi.

Substitute Robert Ponda came close to netting the second goal of the game after being set through by Lawrence Juma. The captain laid in a weighted delivery to the youngster, who went past defender Washington Munene but failed to chip past custodian Maxwell Muchesa.

Against the run of play, Peter Thiongo had a perfect opportunity to seal victory for the host, but Daniel Guya’s swift reaction was important as the two teams settled for a point apiece.