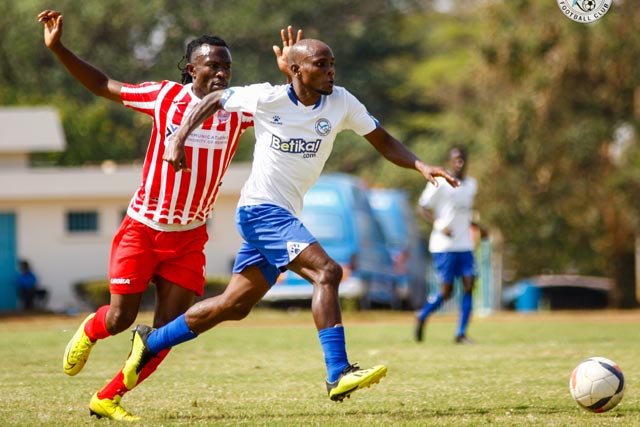 Kevintom Muchika’s header in the dying minutes was all the difference as Talanta came back from behind to snatch a late winner.

In an FKF-Premier League fixture staged at Kasarani Annex, both teams began proceedings on a dull note but gradually gained momentum ten minutes into the match.

A minute past the quarter-hour mark, Joe Waithera broke the deadlock. The forward sneaked ahead of Barack Odhiambo to tap in past Kelvin Olango.

At the half-hour mark, the visitors leveled the scores through Hassan Mohamed. The striker sneaked past Daniel Guya to nod in past Kevin Omondi.

Five minutes from the break, Ambrose Sifuna came close to scoring the second goal of the match. The midfielder dashed into Talanta’s penalty area, heading in Lawrence Juma’s delivery, but custodian Kevin Olango was well placed to save his attempt as the two teams went into the break level.

Upon resumption, Sofapaka had another chance on goal. Second half substitute Kelvin Oduor lofted in a great delivery, but Daniel Guya’s header went wide.

Twenty minutes into the game, captain Lawrence Juma came close to adding the second, but Kevin Olango punched out the midfielder’s shot.

Ten minutes from time, Lawrence Juma yet again had a chance on goal. The captain’s long range volley almost went past Olango, but the custodian swiftly reacted to finger tip out the danger.

Against the run of play, Talanta doubled their advantage through Kevin Tom Muchika. The defender headed in Oalo Denis’s delivery past Kevin Omondi as the newbies snatched maximum points.