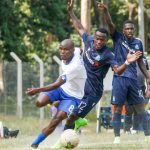 Goals in either half from Joe Waithira and Peter Lwassa were the difference as the two teams shared a point apiece in Wundanyi.

Five minutes into the match, Joe Waithira laid in a good low cross for Lawrence Juma. The midfielder shot a hard one on goal, but his attempt went off target.

Six minutes before the half-hour mark, Alex Imbusia came close yet again after being set through by Lawrence Juma, but the midfielder was denied by Gad Matthew’s fingertip touch.
At the half-hour mark, Joe Waithira broke the deadlock to give Sofapaka the lead. The striker collected Said Tsuma’s cutback pass before shooting a hard one past Gad.

At the stroke of half-time break, Joe Waithera dribbled into the opponents’ half, laid in a through ball to Lawrence Juma, the midfielder chipped past Gad Mathew only for Alpha Onyango to clear the ball off the line.

Ten minutes into the second half, the visitors pushed bodies upfront for the equalizer. Benson Omalla and Peter Lwassa had a good exchange of passes. 25 yards from the penalty area, the Ugandan lifted in a dangerous swinger, but Stephen Okola was well placed to head the ball back to play.

Twenty minutes from time, Samuel and Alpha Onyango had a lethal combination in Sofapaka’s defense, only for Alpha to be denied by the crossbar after Kevin Omondi failed to handle his screamer.

With a quarter to go, the visitors pulled one back to level the scores through Peter Lwassa. The former Sofapaka forward collected a lost ball before loping over past Kevin Omondi.

Against the run of play, Hansel Ochieng had a near-perfect chance to restore Sofapaka’s lead, but the winger failed to put the ball past Mathew as the two teams settled for a point each.