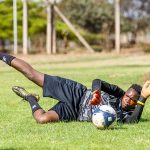 Sofapaka goalkeeper’s coach David Okello has heaped praise on youngster David Obasanjo, describing him as a top performer in the near future.

Okello has been impressed by Obasanjo, who has been working hard in training.
“I have been studying Obasanjo in training, and honestly, he has been coming along well. At the beginning, he was so shaky and out of confidence, but over time, with the kind of training I have been having with them, he has tremendously improved.” Okello told the club’s website, www.sofapakafc.co.ke.
Obasanjo, who joined the club on Kitale Day, has shown great goalkeeping qualities.
“He has great reflexes; he is strong on foot and perfect in the air—aspects that make him stand out. He possesses equal attributes and qualities with Mathias Kigonya, and I foresee a great career for him in the coming years.” He added

Okello, who has top keepers at his disposal, is confident Obasanjo has trained well and will be ready to play when called upon.

“I am so lucky to have a very strong goalkeeping department.” I have three experienced custodians in Kevin Omondi, Mathias Kigonya, Simon Masaka, and the young David Obasanjo. It may look too obvious that he won’t be able to break into the first team and get minutes under his feet anytime soon, but trust me, David is up to the task. Injuries and suspensions are unavoidable, and when such occur, I am confident he will perfectly fit in the squad.” Concluded Okello

David Okello will be hoping to have a solid performance with clean sheets as his focus ahead of the new season.