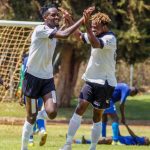 In the 1-1 draw against Nairobi City Stars, Davis Kasiyre came off the bench to net the equalizer in a friendly match played on Friday at Vapor grounds.

The Ugandan forward, who joined the club early this month, has expressed his delight at netting his first goal for the club.

“Scoring is my greatest ambition while on the pitch because it literally defines me and my role in the team. I am glad I had my first for the club today.” He told the club’s website

“I am glad I was able to get some minutes under my feet yesterday and, most importantly, crowned the day by being on the scoresheet after returning from an ankle injury. Yesterday’s goal will definitely boost my confidence level and scoring touch as I look forward to the season.” He added

“Our preparations have been great despite the injury setback that I had a fortnight ago. I am glad I am back and will be working towards being fully fit before the season starts.” Concluded Kasiyre

Davis Kasiyre, who joined the club from KCCA of Uganda, will be hopeful of having a fruitful campaign in his first season with the club.