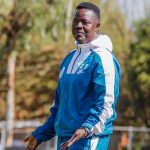 Head coach David Ouma has expressed his satisfaction with the team’s preparation ahead of the new season.

The tactician is impressed by the team’s performance following the one-all draw against Nairobi City Stars.

First, I must commend the players for the hard work they have been putting in. I am so glad at how the boys turned up today. We had a relatively slow first half, but we improved in the second half. They really stood up and fought to get back in the game, and that’s a sign of a strong team with the right mentality. Ouma told the club’s website.

I missed Davis in the last friendly match, but I am glad he was back with the team yesterday . He made an impact in the forty minutes that he played, and I am happy with how he performed. He is a top striker and a lot is expected of him. He started off well today, and I hope he will be impactful during the season. Concluded Ouma.