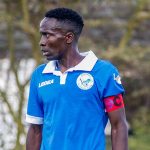 Sofapaka have appointed Titus Achesa as the new club captain.

We are delighted to announce Titus Achesa has been named our new men’s first team captain.
Achesa, who joined the club in 2018 and has been serving in the leadership ranks as a deputy captain, has finally been promoted. The defender, who is the longest-serving team player, will serve as the first team captain for the upcoming season.

On his part, coach Ouma lauded Achesa as a committed player who has shown tremendous leadership qualities.

“He has been very industrious for the team and shown a lot of leadership abilities.” “I am glad to have him as part of my leadership ranks, and I believe that with his experience and expertise, he will be able to lead the team on the right path.”

Achesa will be deputized by Burundi International’s David Nshimirimana, Stephen Okolla, and Roy Okal as the first, second, and third vice captains, respectively.