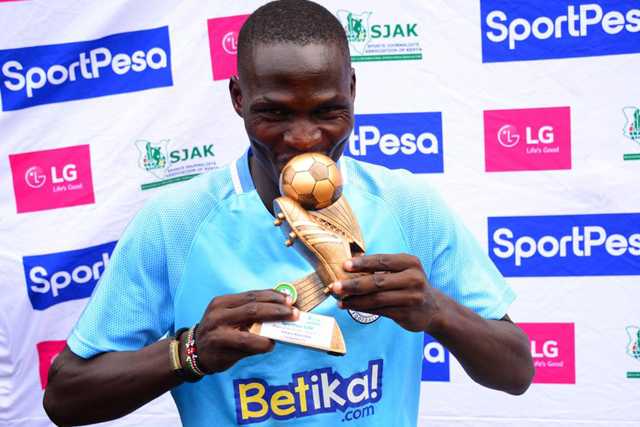 Sofapaka’s Ugandan striker Umaru Kasumba has been named the Sports Journalists Association of Kenya (SJAK) player of the month for February becoming only the second player ever to clinch two awards in the same season.

Kasumba won the coveted trophy in February for the first time before coach John Baraza and keeper Justin Ndikumana followed that up with a double award for coach and player in March.

Kasumba’s seven goals in April put him ahead of everyone else, beating AFC Leopards’ Whyvonne Isuza and two of the league’s top three scorers, leader Allan Wanga of Kakamega Homeboyz and third placed Enosh Ochieng of Ulinzi Stars.

In the final vote tally by the SJAK football committee, Kasumba managed 23 points ahead of Isuza who had 21 while Wanga and Ochieng had 16 and 10 points respectively.

“I knew you would come back and give me another award. I’m a believer so when I told you that I’ll win it again before the season ends it was out of my faith,” Kasumba said as he received his award at the team’s training base in Eastleigh.

“I am very happy and pleased to be getting this award because it is the product of teamwork and hard work on the pitch. My target now is to fight for the golden boot and I hope I can get it in the final two games of the season,” Kasumba stated.

Meanwhile, the striker has confirmed he will be heading to Europe for a series of trials after the season ends and he is hopeful of clinching a deal.

“I have faith that I will go there and work hard to earn a professional move abroad. But at the moment my concentration is on helping the team finish the season strongly and try to win the golden boot. There are several contacts that I have had from Germany but we will wait for a confirmation from my representatives,” Kasumba stated.

The striker has scored 17 goals this season and ranks as the second best scorer in the league after Allan Wanga who has 18.