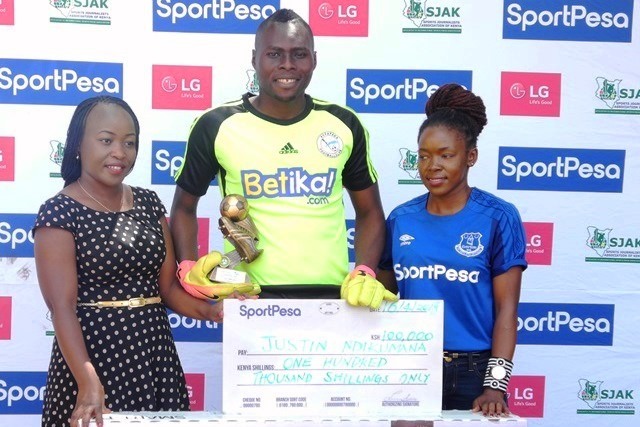 Sofapaka custodian Justin Ndikumana became the second goalkeeper to win the Player of the Month Award since its inception five years ago.

Ndikumana trounced the likes of Bethwel Warambo, Enosh Ochieng and Eric Kapaito to scoop the March 2019 gong following a series of heroic goalkeeping for Sofapaka. Gabriel Andika became the first goalkeeper to be crowned way back in 2015.

The Burundi international kept three clean sheets out of four matches played in March and saved a crucial penalty that secured vital points for his title-chasing club. “I have been praying that I become the
winner this month because I played well and everybody was talking about me. I’m glad I caught the panel’s eyes and so I can look forward to better days,” Ndikumana jubilantly declared.

“Such awards boost my confidence and the team at large. I want to thank the entire squad, not just the defense that helped me keep the clean sheets. I feel like I can face any opponent and stand tall in
goal and prevent them from scoring,” he added.

Ndikumana was nominated alongside Allan Wanga of Kakamega Homeboyz, Vincent Oburu of AFC Leopards, Enosh Ochieng of Ulinzi Stars, Bethwel Warambo of KCB and Eric Kapaito of Kariobangi Sharks. Wanga and Oburu were dropped from the final shortlist that was subjected to a vote.

The Sofapaka man garnered 27 points to clearly finish ahead of Warambo and Ochieng who tied on 21 point. Kapaito finished 4th on ten points.

Teammates burst in Lingala sings when his name was read out at their training ground. His fete crowned a perfect month for Sofapaka who won both player and coaches’ award. John Baraza was voted March Fidelity Insurance Coach of the Month having guided his club to more victories over other league rivals.

The Africa Cup of Nations bound Ndikumana talked up the team’s chances ahead of their debut in African continent’s premier football event. “We are very happy to have made history of joining the big boys up there. The intension is not to just participate but compete for every point and hopefully reach another milestone of getting past group stage,” he quipped.

CAPTION: Sofapaka’s Justin Ndikumana receives the Footballer of the month award for March 2019 from Maureen Kemunto of LG and Sportpesa’s Trizzah Akoth at Eastleight High school on April 16,2019.