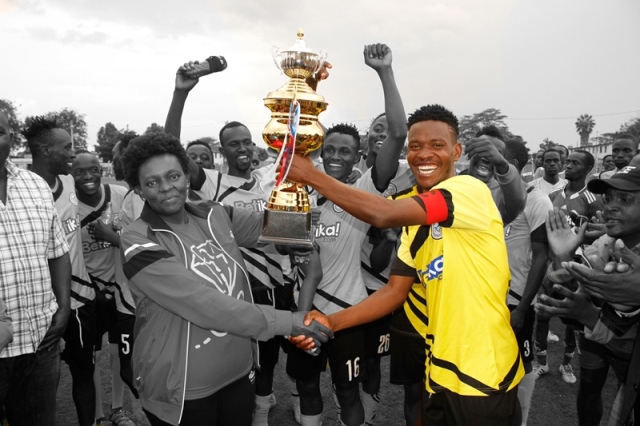 Sofapaka U20 skipper Edmond Dante Kwanya is fired up and ready to go, come the Saturday match. He finally got his senior team debut after getting the nod from assistant coach John Baraza, to play in the against Tusker FC on 11th November Kenyan Premier League (KPL) match.

A utility player, Kwanya was introduced in the final ten minutes of the match as the 2009 KPL champions went on to win 1 – 0 and he holds the moment highly, especially since he was thrown into the fray, replacing Brian Magonya, to aid the team hold onto the first half lead that came courtesy of Humphrey Okoti’s goal.

Having waited patiently for his chance all season, Kwanya, who can play both as a midfielder and a central defender, is more confident now and fired up to work even harder for more and regular appearances. He had been elevated from the junior team to the senior team now, and had not played before in any of the senior team matches.

“It was long coming but in the end I am happy I got my chance; it was even better because we won and kept a clean sheet. Football is all about patience, timing and exploiting your chance when it comes. I think I have tasted both and now I am very confident ahead of the coming assignments. The future looks good for the team and I.”

The youngster hopes to feature again in the final match of the season, when Sofapaka entertains Zoo FC in Narok on Saturday 18 November.

Kwanya got to lead his youth team in the U20 side and still under the watchful eyes of coach Baraza’s . “Both Baraza and Sam Ssimbwa have played key roles in my career as a player and am grateful for that. Coach Ssimbwa saw my potential and named me in his squad for the season. I am still learning, growing as a player and this trust that has been bestowed upon me, I want to repay it by playing even better with the skills that I have gained and I believe the next season would be better than now, am looking forward to it,” he added.

Kwanya joins a band of fellow youngsters, Mohamed Kilume, Brian Magonya, Reuben Juma and Samuel Mutiria at the team who have grown through the ranks, from the U20 side to representing the senior team.