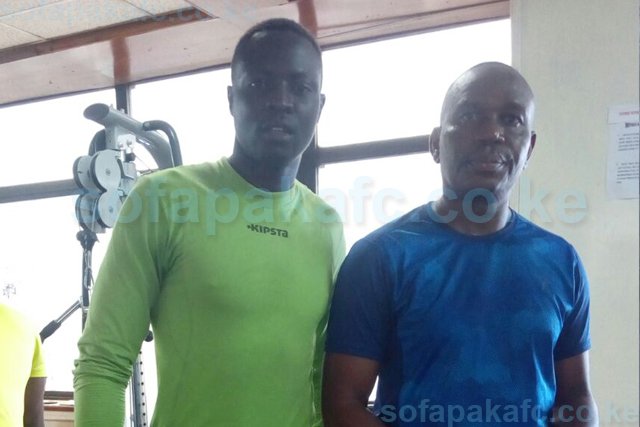 At only 22 years of age, Sofapaka’s new signing Emmanuel Opiyo is already dreaming of becoming Kenya’s greatest goalkeepers of all times.

Opiyo said the aspirations is not too much to ask having gained invaluable experience at National Super League (NSL) side Nairobi City Stars from where Batoto Ba Mungu plucked him on a two-deal.

“The NSL is as equally challenging as the KPL and I learned quite a lot in goalkeeping during my stint with City Stars. I’m overly eager to apply what I learned at mu new club and hopefully, I should be one of the best goalkeepers in Kenya,” said Opiyo.

He however, reckons that he will be forced to work extremely hard to to be better than Sofapaka first choice shot-stopper Mathias Kigonya and substitute Reuben Juma.

These guys (Kigonya and Juma) have been around for a little bit longer and common sense dictates that I should work pretty hard to be a notch higher than them. It won’t be easy but it’s possible,” said Opiyo during Sofapaka’s morning work-outs at Eastleigh High School.

Opiyo cut a niche for himself when he excelled at Busia High School and it was least surprising when Sofapaka enlisted his services after he completed his O-Level education.

He upped his game in goalkeeping and surprisingly rose quickly through the ranks to de deployed the first choice custodian at City Stars with Victor Onyango and Emmanuel Odhiambo his understudies.

A calm and composed player who is known for his acrobatic saves, Opiyo says he can’t wait to help Sofapaka clinch the 2018 KPL.

“Sofapaka is a big brand and all the players have the responsibility to safeguard its dignity.  If I shine, I know it will open doors for many opportunities which include playing in the European leagues. I want to prove just what stuff I’m made of in the domestic league scene,” saiid Opiyo.

In the meantime, Kigonya has tipped Opiyo to achieve greater things at the club.

“The boy is a go-getter and if he continues with the spirit, he will be the next big thing in as far as goalkeeping is concerned,” remarked Kigonya.