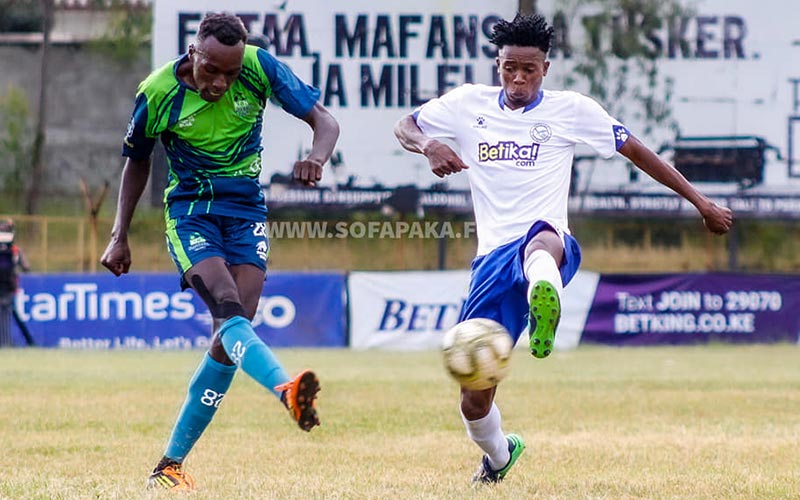 Two quick goals from Robison Kamura and James Mazembe twenty minutes from time earned were al important as KCB collected their first win of the season.

Sofapaka began the math on a high with an intent to get an early opener. Joe Waithera curled in a beautiful shot but Gabriel Andika was well placed to collect out the danger

On the quarter hour mark, KCB made their first real attempt on goal, Derrick Otanga connected Harun Thomas’s cross but Kevin Omondi was well placed to punch out the danger

On the half hour mark, another attempt by the bankers came close to take the lead, Alembi Nahshon and Robinson Kamura combined well but the latter’s header went way above the crossbar

Upon resumption the boss made a quick change, Alex Imbusia paved way for new substitute Jacob Onyango, a move that added power upfront and the new player on the pitch almost put us ahead but his header hit the the bar for a goal kick.

On the hour Sofapaka had another opportunity on goal, Joe Waithera dribbled past Robinson Kamura, but the midfielder’s final strike deflected off Alamebi for a pick by Gabriel Andika

Ten minutes later a costly mistake by keeper Kevin Omondi gifted the bankers goal scoring chance. Robinson Kamura stepped up hit a low shot that rattled the crossbar before brushing off Omondi’s leg to give the visitors the lead.

Ten minutes from time, Sofapaka came close to level scores. A beautiful delivery by Lugogo to Roy Okal but the midfielder failed to direct his tap in attempt on an empty net before Harun Thomas made a quick reaction to clear the ball back to play.

Six minutes on, the visitors doubled their lead through James Mazembe, the winger pounced on Mike Oduor’s cross to slot in past Omondi

Against the run of play Sofapaka pulled a goal back through Stephen Okola, the defender was well placed heading in David Kingatua’s delivery. Okola’s goal breathed life for BatotoBaMungu but their spirited attempts bore no fruit as the bankers held firm to collect maximum.