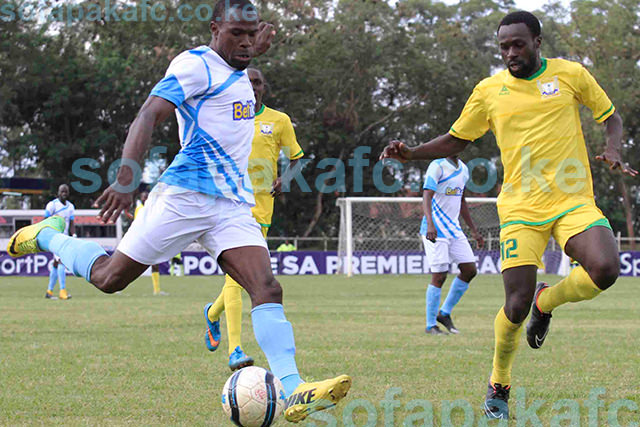 Sofapaka have declared that they have not given up on their 2017 Kenyan Premier League (KPL) title hopes despite losing 2-1 to Kakamega Homeboyz at Mumias Complex last weekend.
The team’s deputy coach John Baraza said they are unfazed by the dropping of points, adding that it’s not over yet until it’s over.
“People may have written us off especially after our closest challengers Gor Mahia extended their 12-point advantage over us, but this is football where common sense dictates that you should not give up especially this time when the league matches are unpredictable,” said Baraza.
Commenting on Sofapaka’s defeat at the hands of Homeboyz, Baraza said the players gave a very good account of themselves although he had misgivings over some decisions by the match referee including the penalty he awarded the hosts.
“I don’t usually like to talk about officiating but the penalty he (referee) awarded to Homeboyz left a lot to be desired. It was not a handball at all and after Homebyz converted, our players seemed demoralized,” said Baraza.
Ugandan Rodgers Aloro was adjudged to have handled the ball inside the box with the referee immediately pointing to the spot for Jeremy Wanjala to take responsibility to give Homeboyz the opening goal.
Despite the loss, Baraza gave plaudits to his charges for a job well done against a battle-hardened Kakamega Homeboyz.
“Away matches are tricky but the team was able to hold its own by going down fighting. We should come out stronger in subsequent fixtures,” said Baraza.
In the meantime, Mohammed Kilume and Umaru Kasumba who received minor knocks during the weekend match are going through therapy and could be fit before Sofapaka’s midweek match against KPL table-toppers Gor Mahia at Moi Stadium in Kisumu on Wednesday, according to Baraza.
“The players received knocks which are not serious and they should be up and about against Gor in Wednesday’s crucial tie,” said Baraza.
Sofapaka left Mumias for Kisumu on Sunday evening and held their first training at the lakeside town yesterday in preparations for the fixture against Gor.