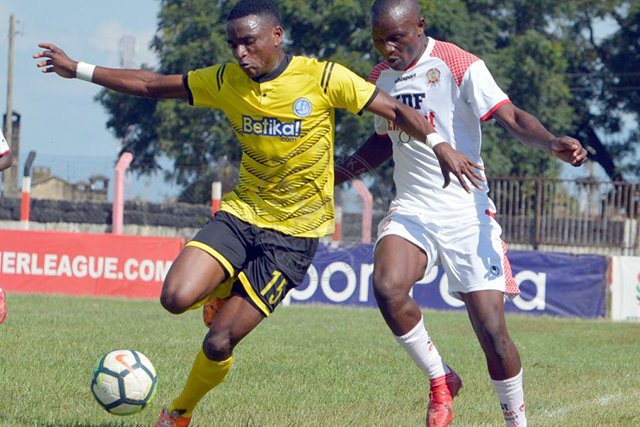 First half goals from strikers Umaru Kasumba and Kepha Aswani were enough to steer Sofapaka to a crucial 2-1 win over the 2010 champions Ulinzi Stars in a thrilling Kenyan Premier League match at Afraha Stadium this afternoon.
The win places Batoto Ba Mungu, 3rd on the KPL log, closed the gap on league leaders Gor Mahia and have them within striking range.
Coach John Baraza only made a single change on the team that drew 3-3 against Gor Mahia last weekend, bringing in Teddy Osok in place of Mohammed Kilume.
Ugandan striker Kasumba who had missed action for close to a month due to sickness, showed glimpses of his sharp form that saw him become the team’s top scorer last season as he was a constant threat to the soldiers the entire time.
The visitors could have taken the lead five minutes into the match, but Kasumba’s strike was blocked by a sea of Ulinzi defenders on the goal line.
He finally broke the deadlock in the 38th minute with a solo effort.
Aswani added the tally two minutes later after capitalising on Kasumba’s move