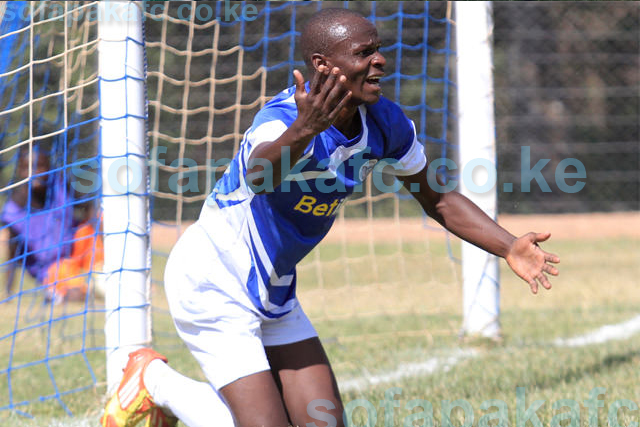 Sofapaka’s Kenyan Premier League (KPL) title hopes were yesterday dealt a big blow after they lost 2-1 to Kakamega Homeboyz at Mumias Sports Complex yesterday.
Batoto Ba Mungu should count themselves unlucky to lose the match after they created numerous scoring chances which went to waste, mainly through Umaru Kasumba and Ezekiel Okare.
Sofapaka started the match on a high winning two consecutive corner kicks which were scrambled to safety by a stubborn Homeboyz defence.
After prodding Homeboyz defence in the early exchanges, Sofapaka snatched the lead in the 40th minute when Okare floated a cross that Kasumba converted past David Juma between Homeboyz posts.
Sofapaka then found themselves on the back-foot when Rodgers Aloro handled the ball inside the box prompting the referee to award Homeboyz a penalty with Jeremiah Wanjala putting the shot past goalkeeper George Opiyo for the hosts to level the terms.
Wycliff Opondo grabbed the winning goal for Homeboyz against the run of play following  a lapse in Sofapaka defence
Sofapaka coach Sam Ssimbwa introduced Morven Otinya for Hillary Echesa in a bid to add punch in the striking line but the changes did little to alter the result of the match.
Homeboyz, who held Sofapaka to a barren draw in the first leg match in Nairobi last April, haven’t lost a game in seven consecutive assignments and have maintained their fourth position in the league chart following the win over Sofapaka.