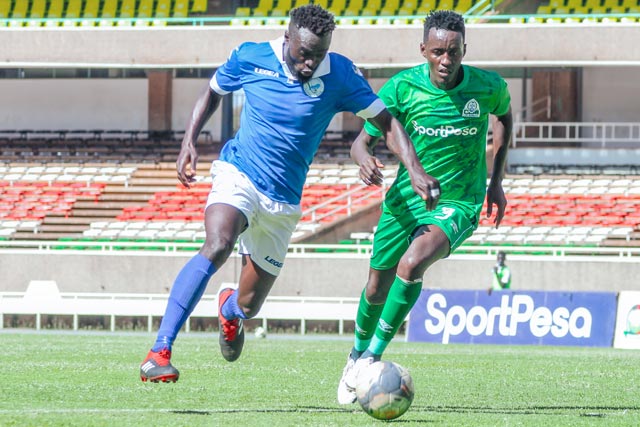 In the opening quarter of the match, we found a great opportunity to take the lead through Ambrose Sifuna. The midfielder collected Brian Wepos’ delivery, but his touch went a few inches wide.

Three minutes later, we almost went ahead in the match. A poorly cleared ball by Gor Mahia’s defense was collected by Sébastine Sunday, who quickly set Roddy Manga through on goal, but the forward blasted his effort over the bar.

At the stroke of half an hour, Benson Omalla once again had the perfect chance to give Gor the lead after collecting Austin Odhiambo’s delivery, but the striker got denied by David Nshimirimana, who threw his body on the line for an important block.

Five minutes before the breather, Baron Oketch made a dazzling move, going through past Geoffrey Ochieng, but Philemon Otieno made a quick run to block the striker’s shot for a corner kick.

Five minutes after resumption, Baron Oketch had a great run into Kogalo’s penalty area, but goalkeeper Gad Mathews was well placed to punch away Oketch’s effect for the big save of the match.

On the hour mark, Gor Mahia attacked through Macharia, and the winger went past Samuel Olwande before finding Benson Omalla, but Kevin Omondi quickly positioned himself for an easier pick.

With a quarter of the game to go, Gor Mahia came close to breaking the deadlock through Omalla. Boniface Omondi collected Austine Odhiambo’s pass, setting Omalla through on goal, but Brian Wepo threw his body on line for a massive block to deny the forward from close range.

Against the run of play, substitute Ben Stanley came close to breaking the deadlock; his pin-point volley troubled Gad Mathews but failed to go through as the two teams settled for a point each.