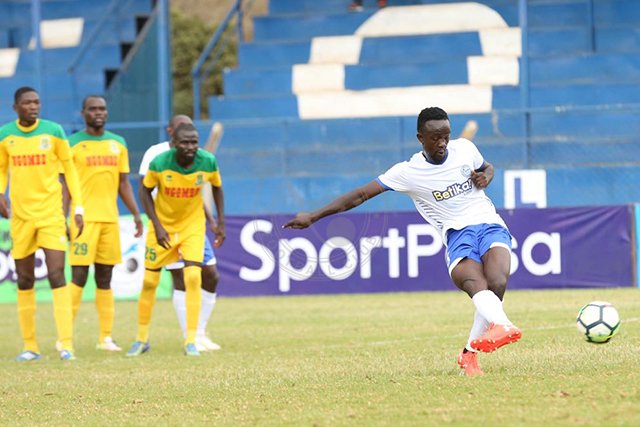 Kepha Aswani, Elli Asieche and Piston Mutamba handed the 2009 champions maximum points despite Mathare strong pressure the final half hour of the game with Alphonce Ndonye’s goal after an hour giving them some hope, but they couldn’t go past that.

Sofapaka broke the deadlock in the 10th minute when Aswani’s seemingly harmless header off an Elli Asieche free kick fizzled through keeper David Okello’s fingers and into the back of the net.

Batoto ba Mungu had to live on the edge in the final minutes of the game after Mathare piled pressure, but they had just enough within themselves to ensure they pick their third consecutive win.

It was a rewarding start for Sofapaka who seemed the most attacking of the two sides with Aswani having earlier had a shot off the left being saved by Okello. Quickly on the other end, Mathare broke off on the counter but Chris Oduor’s shot from Cliff Nyakeya’s tee up went wide.

Aswani’s afternoon which had started brightly on a goal-scoring mood was however cut short abruptly when he had to limp off injured barely five minutes after scoring. He was replaced by Teddy Osok which now meant coach John Baraza had to re-arrange his tactical plan for the game.

Mathare collected themselves up after conceding early and they made a response in the 18th minute when Omondi scored from the penalty spot after new signing Dennis Odhiambo handled inside the box.

The game turned out to be an evenly balanced affair, the two sides doing their best to outwit each other especially in the middle of the pack. Mathare passed the ball nicely around the park, but they could not get that pass to break off the defense.

On the half hour mark, Sofapaka came close when keeper Okello had to be at his best to tip the ball over for a corner from Piston Mutamba’s curling freekick from the left.

Five minutes later, Sofapaka were 2-1 up from the penalty spot after Mutamba was axed in the box by keeper Okello after he intercepted a short back pass from left back David Owino back to the keeper. Asieche stepped up and converted.­­­­

Batoto ba Mungu kept the engine running in the second half and they needed just three minutes to stretch their lead further when Mutamba got on the score sheet after intercepting another short back pass to the keeper before gliding past and slotting in an empty net.

Mutamba should have had his brace on the hour mark after George Owino’s defensive header off a Yussuf Mohammed cross fell on his path but his eventual shot was wide.

Two minutes later, Mutamba was in the thick of things once again when he cited an intelligent run from Waruru before feeding him, but the former Ulinzi hit man’s shot from the left went over.

Against the run of play, Mathare pulled one back and started their journey for a memorable comeback when substitute Alphonce Ndonye struck a belter from inside the box catching keeper Wycliffe Kasaya off guard.

Mathare piled the pressure in the consecutive minutes pushing Sofapaka back but they could not get a goal to pick at least a point off the tie.