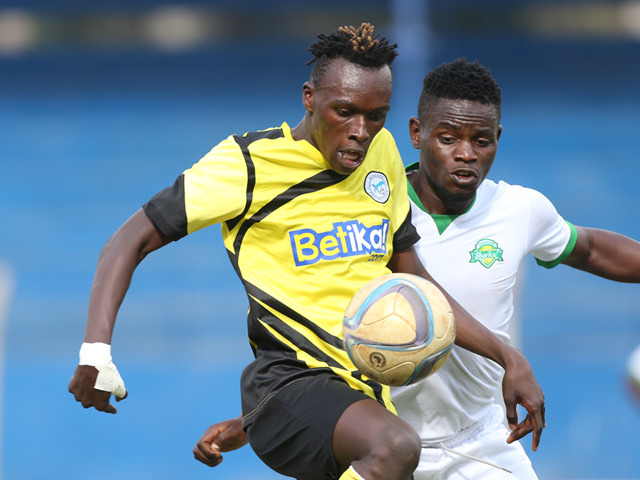 Sofapaka dropped more points in their quest to wrestle the Kenyan Premier League (KPL) title after they were held to a barren draw by Kariobangi Sharks at Kenyatta Stadium in Machakos yesterday.
During the match played under an overcast sky, Batoto Ba Mungu had a huge chunk of action only to be wasteful in front of goal.
Umaru Kasumba was the first to miss a guilt-edged scoring chance inside 12th minute from the onset when he dummied round the Sharks defence only to shoot agonizingly wide.
Ezekiel Okare was the next to misfire from 16 yards out after leaving his markers for dead but still could not convert the chance, Sharks made swift counter-attacks which almost yielded a goal.

On the half hour mark, Sofapaka were again denied by the stubborn Sharks defence when Meshack Karani miscued his kick during which time Sharks defence had gone to slumber.

From the team that lost 1 – 2 to Ulinzi Stars last Wednesday, Sofapaka coach Sam Ssimbwa made only one change by introducing Karani to take the place of Kennedy Oduor who was consigned to the bench.
Goalkeeper George Opiyo got a third straight start in the absence of first keeper, Ugandan Mathias Kigonya who suffered a dislocated shoulder in the game against Posta Rangers three weeks ago.
Opiyo gave a good account of himself and was shielded by a compact defence line composed of Jonathan Mugabi and Rodgers Aloro.
For the second straight game, Ezekiel Okare, who has eight goals so far, started on the bench with Kasumba being deployed as the lone striker.
And for Sofapaka , they will strongly feel they were victims of rough justice after failure to avenge the 3-1 defeat suffered at the hands of Sharks in the first leg match.
However, speaking after the match, Sofapaka deputy coach John Baraza was unfazed by the result, saying they still harbour hopes of clinching the title.
“We may have dropped points but this is football. Its not over until its over. We will devise a strategy of getting a winning formula in our next match against Kakamega Homeboyz,” said Baraza.