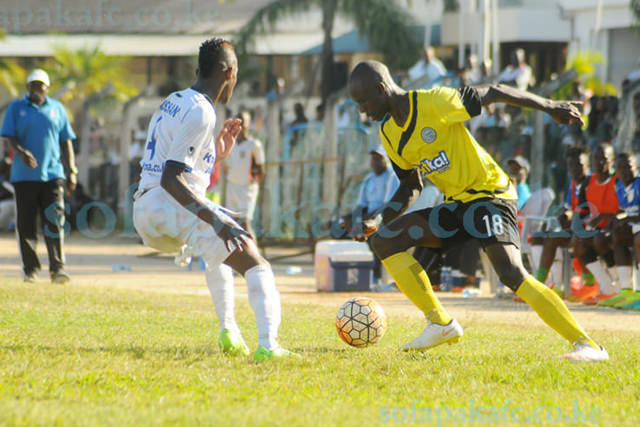 Sofapaka Technical Director Martin Ndagano described Mombasa as one of the dreary hunting grounds in the country, adding that his team exceeded expectations by humbling the dockers before their own fans.

“Winning in Mombasa under the hot temperatures is not child’s play and I must commend Sofapaka players for holding on to their own to collect maximum points at the expense of Bandari,” remarked Ndagano.

He said it was encouraging to note that Sofapaka players recovered fast after Bandari had the first bite of the cherry in the match played under punishing temperatures.

“We knew it was not going to be easy as Bandari has a knack of dealing with their opponents in Mombasa with bare knuckles. They even had the audacity to score first but our players fighting spirit saw Kigonya (Mathias) bury a penalty for the equalizer before Kasumba (Umaru) killed off the game with the second strike,” said Ndagano.

The official was also quick to give plaudits to goalkeeper Kigonya for his unprecedented feat of scoring a goal through a spot kick after an infringement inside the box.

“I want to congratulate Kigonya and urge other glove-men in the team to emulate him. Even goalkeepers can score goals and what Kigonya did in Mombasa is to say the least commendable,” added Ndagano.

Kigonya, who is making a comeback in the team after a nagging shoulder injury, is fast establishing himself as a match-maker at Sofapaka and whose ability is doubtless.
In the meantime, Ndagano said following their weekend success, Sofapaka will strive to get more positive results in their remaining fixtures to put pressure on league leaders Gor Mahia for the title.

Sofapaka next face Western Stima on Sunday and will be gunning for nothing short of another maximum point-haul to realize their dream of recapturing the title they last won in 2009.

Separately, Sofapaka will square it out with a yet unconfirmed team for the Mashujaa Day Cup on Friday.

Ndagano hinted that Sofapaka will use the match to test players who have been on the substitutes’ bench.

“We want to test the players who have been inactive and if they will fit the ball, they will be gradually absorbed in the starting line-up,” said Ndagano.