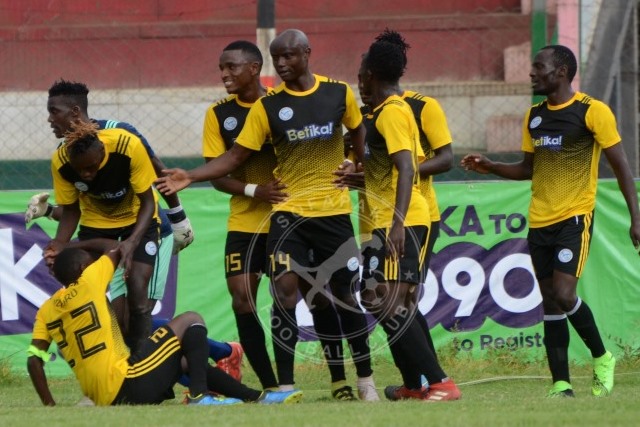 John Avire scored late on as Sofapaka came from a goal down to pick a 2-2 draw against Ulinzi Stars and a draw on the road in the fourth match of the 2018/2019 season at the Afraha Stadium in Nakuru on Saturday.

Sofapaka had gone ahead through Dennis Odhiambo but Ulinzi struck twice in quick succession in the second half before Avire ensured the spoils were shared.

Odhiambo broke the deadlock on the half hour mark with a delightful finish, a first time volley unmarked from a Cliff Kasuti cross.

Prior to the goal, Sofapaka had chances to score. Odhiambo had a chance in the 12th minute when he rose at the edge of the six yard box to link up to a Cornelius Juma cross, but the header went over.

Five minutes later, Titus Achesa clipped the upside of the crossbar with his free kick from the right curling over the wall.

The flurry of chances continued and in the 22nd minute, Mike Oduor broke into the box from a deep cross and controlled it well with keeper James Saruni off his line, but he could not finish past the shot stopper.

Six minutes later, Avire had a chance when he broke into the box but his shot was saved. He followed up on the rebound and was clipped inside the box but the ref waved play on.

A minute later, Stephen Waruru had a chance to claw his former employers when a cross from Elli Asieche found him at the edge of the six yard box, but he couldn’t get a strong impact on the shot.

The blushes were wiped though when Odhiambo broke the deadlock.

Five minutes to the break, Avire should have surely had a goal of his own when he broke the offside trap to race to a Kasuti cross, but his first control let him down as it took him off target.

Ulinzi came back with more pressure in the second half and keeper Richard Aimo produced a brilliant one-handed save to turn behind Daniel Waweru’s free kick for a corner in the 55th minute.

But the hosts did not relent and scored two quick goals via Enosh Ochieng. The forward headed home from a cross from the left before finishing off four minutes later via a Waweru delivery.

Sofapaka pushed in the final minutes to get their lead back and they had some hope in the 83rd minute when Avire beautifully looped a header over Saruni.

Twice, Avire should have won the game for Sofapaka but his efforts were not on target.

Just two minutes after scoring, he controlled a cross well at the edge of the six yard box and with two of the chasing defenders down, he failed to beat the keeper blasting the ball over. He had another chance again when he burst into the box, but his low shot with the keeper at his mercy went wide.