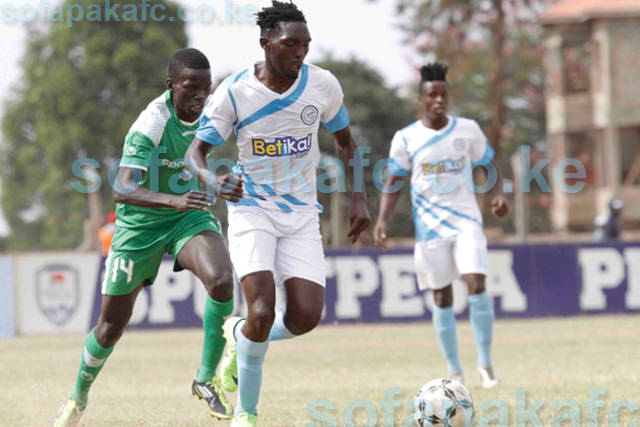 After falling victims of circumstances in which they dropped from the second to fourth position in the Kenyan Premier League (KPL) chart, Sofapaka will be gunning to beat table-topping Gor Mahia in a midweek match at Moi Stadium in Kisumu today as they seek to climb up the ladder.
Last week, Kenya Football Federation (FKF) were forced to drop Nakumatt and Zoo Kericho from the top-tier league following a successful legal suit filed by the former federation chairman Sam Nyamweya who has been vouching for a 16-team league.
The amendment of the league affected the initial standings and while some of the clubs had their positions improve others dropped including Sofapaka and they now have to play catch-up.
With the suspension of Zoo FC and Nakumatt from the league, Sofapaka have relinquished six points and dropped two places to fourth on the log but all and sundry within the team believe they are still in contention for the title.
It’s on this background that Sofapaka have sounded war-drums in a bid to bounce back in the contention for the gong whose winner will represent Kenya in the 2018 Africa Champions League.
As it stands, Gor are leading the chart with 45 points followed by Kakamega Homeboyz with five points shy, but the Technical Director of Sofapaka Martin Ndagano is categorical that the team can regain its second slot and even overtake Gor, Kakamega Homeboyz and Ulinzi Stars who are above them in the latest pecking order after the amendment of the league.
Ndagano said Sofapaka’s turning point of their ambitions could start today in Kisumu against a K’ogalo side which they overcame 2-0 in the first leg match.
“Of course, the unprecedented development as pertains the composition of teams in the league is a big blow to us.  But I must say it would be foolhardy crying over spilt milk and we want to register every point we can lay our hands on beginning with the fixture against Gor,”
He added:”We don’t expect things to be any easier since Gor will draw great inspiration from their large pool of fans in Kisumu but they better understand that we have a reputation to protect as a team that beat them in the first leg clash. I expect our boys to give them pound for pound throughout the match,”.
Sofapaka, who have been in camp in Kisumu for the last three days, have had a disappointing run of three win-less outings and nothing will be as sweet for them than beating Gor.
And the good news for Sofapaka is that the team’s first choice goalkeeper Mathias Kigonya who had been nursing a dislocated shoulder has fully recuperated and is available for selection.
On the flip side, Sofapaka will be without mercurial midfielder Mohammed Kilume who suffered a knock during the 2-1 defeat by Kakamega Homeboys in Mumias Complex last weekend and will be replaced by the equally talented Humphrey Okoti
The team’s red-hot striker Umaru Kasumba who also sustained a slight injury in the fixture has been declared fit to be named in the first eleven.
Sofapaka’s defence will have to be on full alert to stop Gor Mahia strikers Jacques Tuyisenge, Meddie Kagere and George “Blackberry”Odhiambo who were instrumental when the Green Army beat Cup holders Tusker 2-0 last weekend.