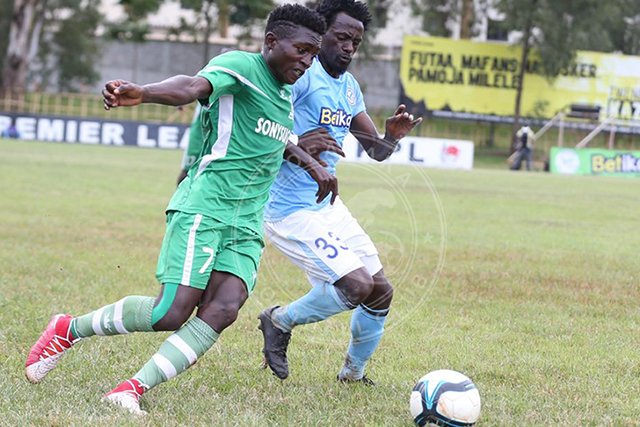 A one-man less Sony Sugar team fought from a goal down to hold Sofapaka to a 1-1 draw at the Ruaraka Complex on Sunday.

It was David Simiyu’s second half penalty that secured a point for the visitors, clawing from one goal down after Mathias Kigonya had given Sofapaka the lead, also from the penalty spot.

Sony had to play almost the entire second half with 10 men after Samuel Olare was given his matching orders for an off the ball elbow on Sofapaka defender Mousa Omar. However, the sugar millers under the tutelage of new coach Patrick Odhiambo fought to secure the away point.

Under the tutelage of new coach John Baraza, Sofapaka controlled possession and had most of the first half chances with Sony struggling to get anything on target. In the eighth minute they asked the first questions with Brian Dayo’s shot from distance sailing over.

In the 20th minute, they had another opportunity when Willis Ouma’s cross from the right found Kepha Aswasni inside the box but his glancing header sailed over.

They finally got into the lead in the 30th minute from the penalty spot after Sony keeper Kevin Omondi charged at Aswani from the back missing the ball as he went for a crossball. Keeper Kigonya took responsibility and made no mistake, slotting home.

Sofapaka continued dictating the tempo and in the 35th minute, Kevin Kimani had an effort from a half volley but keeper Omondi was well behind the ball to collect.

The hosts were handed a massive advantage eight minutes into the second half when Samuel Olare was shown a straight red card after elbowing Mousa Omar jostling for space in the wall.

The sugar millers had a brilliant chance to gather a point especially with a man down when the ball fell graciously on David Simiyu’s path one on one with keeper Kigonya, but he took a rushed decision for a shot that went wide.

They were almost punished seven minutes later but Kimani’s effort after a quick change of passes with Dayo inside the box went wide.

Waruru also tried his luck with a one-time volley inside the box, but keeper Omondi parried it away.

Simiyu should have taken his side back level when Willis Ouma’s clearance fell on his path, but he was impatient one on one with Kigonya, shooting the ball wide when he should have gone for precisions.

He however atoned for his miss minutes later when he converted from the spot after a defensive mix up ended up in Humphrey Okoti handling inside the box.

With the goal, Sony momentarily tried to push for a winner with the introduction of Menjamin Mosha, but Sofapaka held their own. With the clock ticking, the sugar millers piled bodies behind the ball to safeguard the point, which they did successfully.