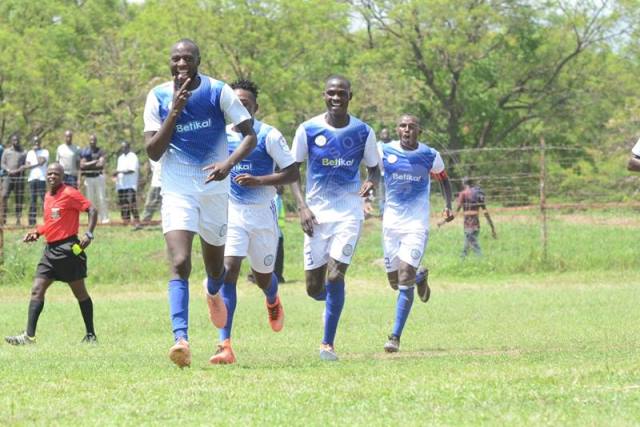 Sofapaka finished the first leg of the Kenyan Premier League at third place with a 3-0 thrashing of Chemelil Sugar in Awasi on Saturday afternoon seeing the side hit the 30-point mark, halfway through the season. Playing his first full 90 minutes of the season, Piston Mutamba struck twice with skipper Stephen Waruru hitting the other as Sofapaka continued in their good form.

Mutamba who had come in to start ahead of John Avire opened the scoring in the eighth minute when he leaped highest inside the box to thump in a header off an Elli Asieche corner.

It was a huge confidence boosting start from the boys as they grew into the game despite an intimidating home support.

Sofapaka had another chance in the 17th minute when Sammy Imbuye nudged the ball off a Chemelil defender teeing up Stephen Waruru, but the striker’s shot from the edge of the area went wide.

On the other end, Chemelil were awarded a questionable penalty when Lucas Waitere went down easily on his own inside the box, but it was instant justice when Justin Ndikumana leaped well to his right to parry away Vincent Mahiga’s spot kick.

In the 33rd minute, Sofapaka doubled their tally when Waruru headed home unmarked at the edge of the six yard box when Umaru Kassumba flicked through a long throw from George Maelo. A minute to the break, Kassumba thought he had poked home his eighth of the season when he raced to a Waruru flick, but the assistant referee had her flag up for offside.

Coming into the second half, Sofapaka were focused on finishing the job. Just three minutes in, Mutamba completed his brace and Kassumba also is brace of assists when the Ugandan put the lanky forward through before he lashed a sweet low strike from 30 yards out beating the keeper.

The host side pushed into the Sofapaka half, forcing the visitors to defend nervously with Gilbert Wangulu’s crosses twice missing the target by a whisker. Late on with six minutes left, Felix Ochieng came close with a shot from distance that was however deflected for a corner.

Sofapaka withstood the late pressure to ensure they get off the road with maximum points and finish the first leg on a high.