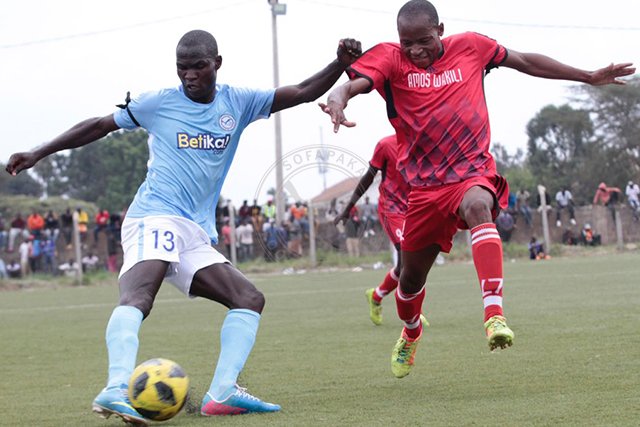 Sofapaka cruised to the last-16 of the FKF-Shield after hitting Baba dogo United 3-0 on Sunday in a match staged at Camp Toyoyo grounds in Nairobi on 24th June 2018.

Waruru scored the first goal on the 18th minute for Sofapaka taking the lead in a clever finish after he was teed up by Kasumba. Piston Mutamba setup the play and passed the ball to Umaru who teed up with Waruru.

Six minutes later Kasumba netted another goal for Sofapaka, again Piston Mutamba involved in the build-up, robbing the ball from Baba Ndogo’s defender Ochieng Kennedy and later delivering a through pass to Kasumba who slotted home from 12 yards out.

Baba Dogo could not find a way past Sofapaka’s defence and their real chance came in the 27th minute when Aloro Rodgers fouled striker Ochieng JohMarik leading to a free-kick. Joshua Warui stepped up but his take hit the Sofapaka wall.

Sofapaka widened their lead on the 50th minute after the break when Pistone Mutamba drove in a free-kick after his team mate Elli Asieche had been fouled by Dola Vincent.

The former Wazito FC striker stepped in curling to the top right corner to give his side the winning goal.

Babadogo made quick changes bringing in fresh legs in the likes of Enock Momanyi and  Kennedy Ochieng, but they could do little to salvage a point for their side.