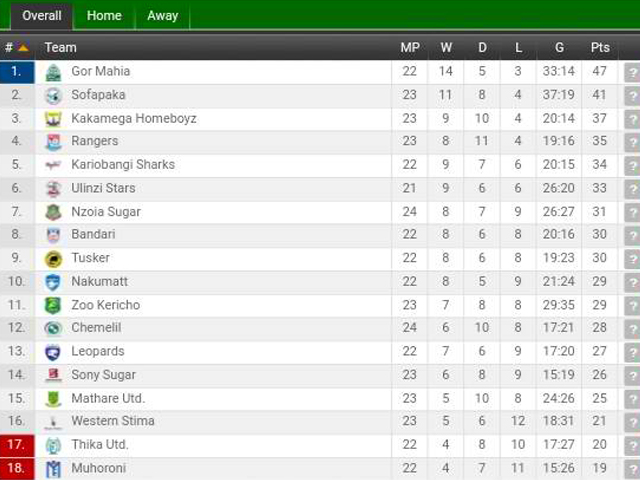 Sofapaka are literally unstoppable and seem determined to ensure that they reclaim the Kenya Premier League (KPL) title they last won in 2009.
After hammering Chemelil Sugar 4-1 at the Narok Stadium last Sunday, Sofapaka who are second in the league chart moved to within six points of leaders Gor Mahia.
The Green Army are sitting pretty at the summit after having earlier dismissed Nzoia Sugar 4-0 at their their second fortress at Moi Stadium in Kisumu.
Following the weekend results, Gor are 47 points while Sofapaka’s haul is 41 points with the league seemingly headed for a photo-finish amongst the two front-runners.
The idea of Sofapaka’s Ugandan coach Sam Ssimbwa to recommend a rebuilding process to the management in which the team signed a record thirteen players during the June transfer window seem to  be paying dividends.
Fast forward three months later, Sofapaka who once hovered in the mid-table have suddenly sprung to life and are now taking a stab to the KPL title whose winner shall represent the country in the 2018 Africa Champions League.
“We may have signed many players, but this is only because we are looking at balance in the team and to increase our depth. We want to win the KPL title and we need many hands on deck to do it,” said Ssimbwa.
The raft of changes in Sofapaka’s playing unit have not been in vain as the team has been able to produce great players like Ugandan imports Umaru Kasumba, Ali Feni, Rogers Aloro and Mathias Kigonya.
It’s the presence of such marquee signings that pundits feel Sofapaka have every reason to believe the title is there’s to lose and especially given that only six points separate them with Gor..
In retrospect, Kasumba who had been banging goals for Sports Club Villa in Uganda has replicated the same at Batoto Ba Mungu camp and with eight strikes to his name thus far, he is closing in Ulinzi Stars marksman Stephen Waruru who is leading the chart with 11 goals.
Kasumba laid bare his intention to win the KPL Golden Boot Award when he netted a double during Sofapaka’s massacre of Chemelil Sugar at the weekend and once again, he is the man Batoto Ba Mungu will be looking to draw inspiration from as they plot for the downfall of Ulinzi Stars in Kericho tomorrow.
As Sofapaka stalks Ulinzi, the team’s coach John Baraza has declared that they have ab very strong resolve to win the match at all costs so as to bridge the gap with Gor.
“Ulinzi may be a strong team but we are determined to prove that we are champions in the making. We dominated the match against Chemelil on their home turf and I don’t expect that against Ulinzi to be an exception,” said Baraza.
Besides Kasumba, Sofapaka will rely on the likes of Maurice Odipo, Jonathan Mugabi and Morven Otinya to bring the army side down to earth.