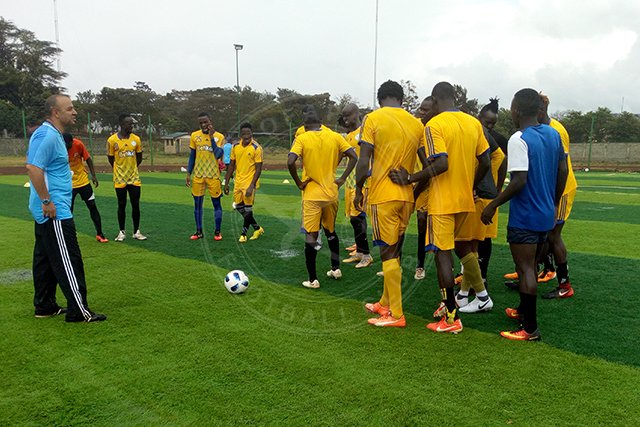 Sofapaka today closed their signings of the season and are now focused on the league kick-off on December 8 after acquiring the services of new players.
Nakumatt talisman John Avire has re-united with newly appointed Sofapaka head coach Medo Melis after completing his move to the 2009 league champions today.
Avire whose antics helped Nakumatt put up a late surge that saw them survive relegation after they overwhelmed National Super League (NSL) side Ushuru in a two-legged play-off, is among two other Nakumatt players who joined their former coach at the new club. The others are midfielder Tom Adwar and defender Faina Jacobs.
Avire who proved to be lethal in front of goal during his short spell at Nakumatt will have to battle for a starting place against captain Stephen Waruru, Ugandan international Umaru Kasumba, season striker Kepha Aswani and Harambee Stars and Emerging Stars striker Pistone Mutamba.
Sofapaka who finished the league fifth last season have also acquired the services of highly rated Burundi national team goalkeeper Justine Ndikumana who joins from Democratic Republic of Congo league side AC St Louis Lupopo. Ndikumana will battle for his position against Richard Aimo who has joined from league side Chemelil and Isaya Wakasala who joins from Ushuru. The team got rid of all their three goalkeepers last season, Mathews Kigonya, Wycleff Kasaya and Reuben Juma after they failed to win any accolades.
Also on board at Batoto Ba Mungu’s camp is highly rated Amavubi’s central defender Soter Kayumba who has joined from Rwanda’s league side AS Kigali, left back Titus Achesa from Posta Rangers and midfielder Ibrahim Kajuba who is unattached.
Ironically, Sofapaka begin their title campaign against Nakumatt on December 8 at the Ruaraka Stadium, which will pit coach Medo and the three players against their immediate former club that has since been re-named Mount Kenya United.

Cliff Kasuti from Ulinzi stars was swapped with Ezekiel Okare in a mutual benefiting deal. Last but not least is Ali Niyonzima from AS Kigali whose services will be needed in the midfield area.