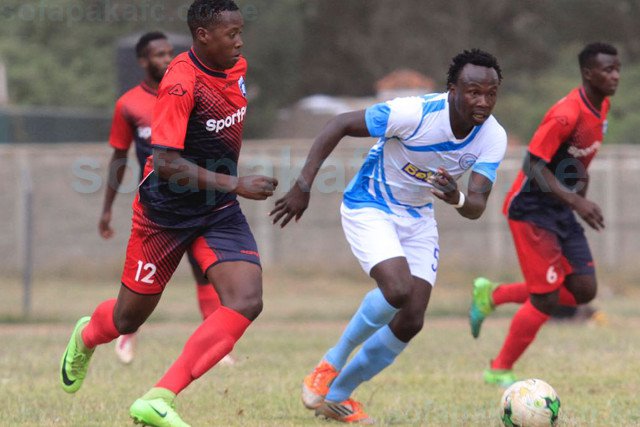 Sofapaka gets their second win of the season with an impressive 2-1 victory over AFC Leopards in the Kenyan Premier League.

Sofapaka opening goal came as early as the second minute from Umaru Kasumba and it did little to dent the Ingwe’ spirits as they looked dangerous on the break, and with the game being played at a frenetic pace, it was excitement galore.

As expected, the encounter lived up to expectations as the Batoto Ba Mungu looked good in the opening exchanges, often getting on the front foot and forcing the Ingwe to defend deep.

In the 17th minute Ingwe boys almost changed the score line when Baker Lukooya tried his luck from range, only to see the effort go just over the bar.

At the other end, Ezekiel Odera found the back of the Ingwe goal thanks to Mburu’s finish to level the matters.

Sofapaka had the best chance of the half to extend their lead in the 35th minute when Musa Omar put the ball on a platter for Stephen Waruru to attack, but he somehow sent the header over the target.

In the 44th minute Leopards were close again as a corner kick from Elli Asieche picked out Michael Oduor, but his powerful header crashed into the woodwork.

The resumption of the second half saw a similar intensity displayed by both sets of players with Leopards looking livelier. Marvin Nabwire thought he had found the equaliser early on, but his effort was ruled out for offside.

Meanwhile, with Sofapaka pushing men upfield, they were leaving themselves exposed to counter-attacks and it meant that Adira had to constantly be on his toes to alleviate the danger.

Two minutes after the hour mark Sofapaka pushed home their advantage. Kepha Aswani cut the ball back from the left byline and Kevin Kimani was in position to finish from close range.

Waruru went close to extending the lead as he had a go from the edge of the box, but it went just wide.

Ingwe outfit looked shell-shocked and had it not been for a combination of good goalkeeping by Adira and some poor finishing, Sofapaka could have been even further ahead as the game reached o final fifteen minutes.

Leopards did have a chance to get an equalizer, but the chance was easily squandered. Sofapaka would have one final opportunity to compile further misery on the opposition, but Adira again came to the rescue as he denied Kepha Aswani