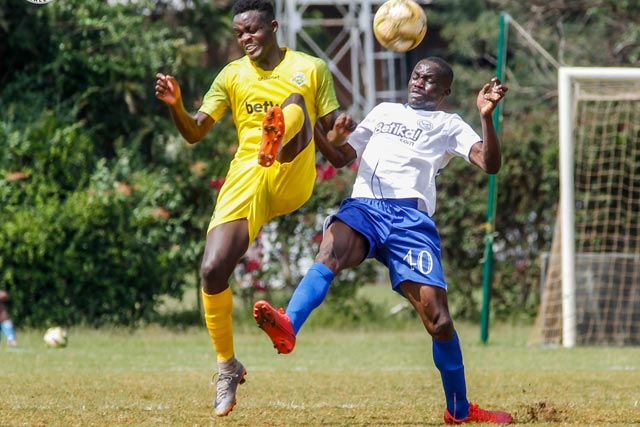 Sofapaka and Kariobangi Sharks battled out to barren draw in round 15 of the FKF-Premier League fixture.

In an early fixture staged at Utalii Grounds, Sofapaka failed to capitalize on a ten man Kariobangi Sharks side to settle for a point at home.

Sofapaka kicked off proceedings on a high tempo to get an early goal into the match. Five mintues into the match,Geoffrey Ojunga made a promising drive into Sharks defense but went over the bar.

At the quarter-hour mark Lawrence Juma and Randy Manga both had a good run into Sharks defense, the latter was well positioned but hurriedly took his shot missing the target from a close range.

Six mintues later, the visitors had a perfect chance to go ahead but keeper Fredrick Odhiambo reacted in time to fingertip Patilla Omoto’s volley out for safety.

At the half hour mark, the slum boys had another attempt at goal, Eric Mata picked out Felix Ochieng but the striker score past Odhiambo

On resumption, Sofapaka continued with their first urge, Hamid Mohammad had his first chance at goal but the youngster blasted his effort wide.

At the half hour mark, Alex Imbusia received Ojunga’s delivery, dribbled through into the opponent’s defense but his effort lacked enough power for an easier pick for Obiero Brandon.

Ten minutes later another attack at Shark’s goal, substitutes David Kingatua and Roy Okal had a beautiful exchange, Okola delivered in a dangerous ball Hamid Mohammad connected but his header went off target.

Ten minutes from time, the host piled pressure upfront Lawrence Juma and Jacob Onyango had a good move into the visitors penalty area but the youthful striker failed to connect past Brandon Obiero.

Against the run of play, Hamid Mohammad thought he had won the match for the 2009 champions but his last-minute shot missed the target with an empty net to score.