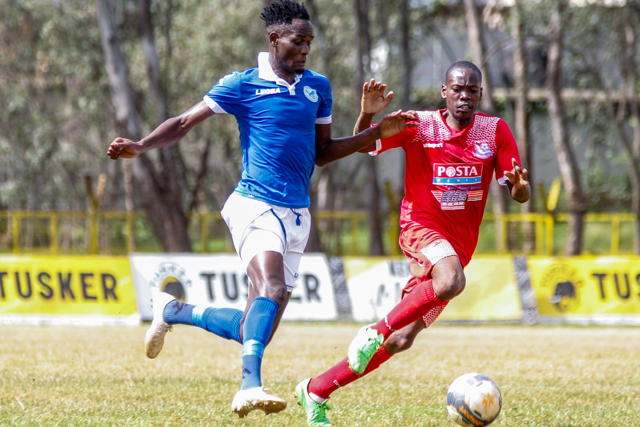 In an early kickoff at Ruaraka grounds, Posta were the lively side, getting the first sniff on goal through Timothy Otieno. The former Batoto Ba Mungu forward received a through ball from Patrick Otieno before hitting a teasing volley, but his attempt went wide.

In a quick response, Baron Oketch and Titus Achesa had a good combination on the left flank before the latter delivered a low cross that found Rody Manga unmarked, but the Congolese hurriedly took his shot, missing the target by inches.

At the half-hour mark, Rangers almost broke the deadlock through Timothy Otieno. The striker picked out Benard Ondieki’s pass but failed to beat Mathias Kigonya after the Ugandan custodian made a timely reaction to his attempt.
At the stroke of halftime, Ugandan forward Davis Kasiyre almost scored the opener, but the striker’s header missed the target by inches as the two teams went in for the break goalless.

Three minutes into the final half, Davis Kasiyre came close yet again. The striker collected Baron Oketch’s low cutback cross but failed to tap past Samuel Njau in goal for Posta.
At the hour mark, Baron Oketch came close to netting his first for the club. He collected a loosely cleared ball by the Posta defense, but his volley went wide.

With a quarter of an hour to play for Davis Kasiyre, he had a decent opportunity to settle the scores, but the lanky forward’s header missed the target by a close margin.

Against the run of play, the Rangers came close to collecting the maximum points through Michael Apudo. The defender’s well-executed volley from 25 yards almost beat Mathias Kigonya, but the keeper made a timely reaction to fingertip out the danger. The save marked the last bit of action as the two teams settled for a point.