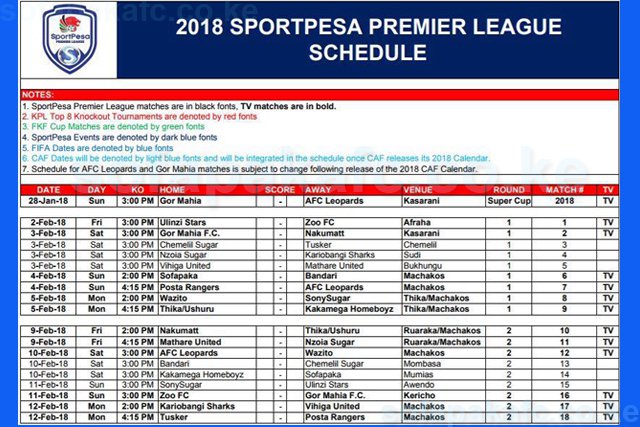 2017 SportPesa Premier League (SPL) runners-up Sofapaka start their 2018 campaign against Bandari at Kenyatta Stadium on February 4 in Machakos from 2.00pm.

This will be the first match of the double header in Machakos with the second pitting Posta Rangers against AFC Leopards at4.15 pm.

Sofapaka’s second match of the new season will be on February 10, 2018 against Kakamega Homeboyz at Mumias Complex from 3.00 pm.

Batoto Ba Mungu will then launch their campaign in the Kenyan Premier League (KPL) Top 8 Tournament  where they are pitted against AFC Leopards at Narok sub county Stadium on February 8.

Although Sofapaka are up against teams which they have prevailed over before, the teams’ deputy coach John Baraza has declared that they will tread carefully.

“Last year, we were above Leopards, Kakamega Homeboyz and Leopards in the pecking order of the KPL but we ought to give them due respect since they are also strong sides. The most important thing for us is to continue working hard to keep the bar high,” said Baraza.

He added: “We want to come back in the league in a big way and if we managed to wind up second in the just concluded Kenyan Premier League, I don’t see why we should not go an extra mile and bag the crown that has eluded us since 2009,”

Baraza said that Sofapaka’s course in the forthcoming assignments will be greatly hinged on the players they shall enlist.

“We are shopping around for the best signings and hopefully, we should be able to challenge for the top honours in the upcoming season,” said Baraza.

Sofapaka players are currently on Christmas and New Years vacation and shall resume training after the end of the festive period.