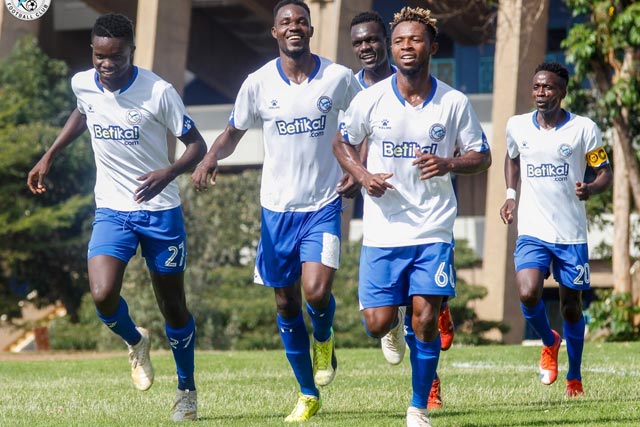 A Rody Manga double in the opening quarter of the match earned Sofapaka a 2-1 win over Bidco United.

In an entertaining match staged at Kasarani Annex, host Sofapaka began the match as the better side, attacking from the word go in a bid to get an early lead, and their search did not last long, striking seven minutes into the match through Rody Manga. The Congolese forward dashed into Bidco’s defense area to head in Ambrose Sifuna’s delivery past Edwin Mukolwe.

Eight minutes later, Nixon Omondi laid in a direct pass to Rody Manga. The striker collected the ball in a crowded pact before unleashing a fierce shot past a helpless Edwin Mukolwe in goal for Bidco United.

At the half-hour mark, Rody Manga had a perfect chance to grab his hat trick after some decent work by Sifuna Ambrose, but Lambert Oyuga denied the striker by clearing the ball off the line.

Five minutes before the break, Bidco came close to pulling a goal back in the match through Peter Nzuki. The forward collected Stephen Waruru’s delivery but failed to score past Fredrick Odhiambo with his shot, lacking enough power for an easier pick for the custodian.

Five minutes after the restart of the second half, substitute Alex Imbusia made a long run into the Bidco’s defense before laying a decent cut-back delivery to Rody Manga, but the forward failed to beat Mukolwe.

Five minutes on, the visitors pulled a goal back through Alex Juma. The midfielder connected with Peter Nzuki’s set piece delivery to head in past Odhiambo.

In the final quarter of the encounter, Geoffrey Ojunga almost added the third goal of the game, but the youthful midfielder in a one-on-one situation failed to direct his volley past Mukolwe.

Against the run of play, another goal scoring opportunity went begging. The combination of Alex Imbusia and Joe Waithera’s on the left flank caused the visitors a lot of trouble, with the latter setting Ojunga Geoffrey through on goal only to be denied by the crossbar as Sofapaka held on for the third win in a row.