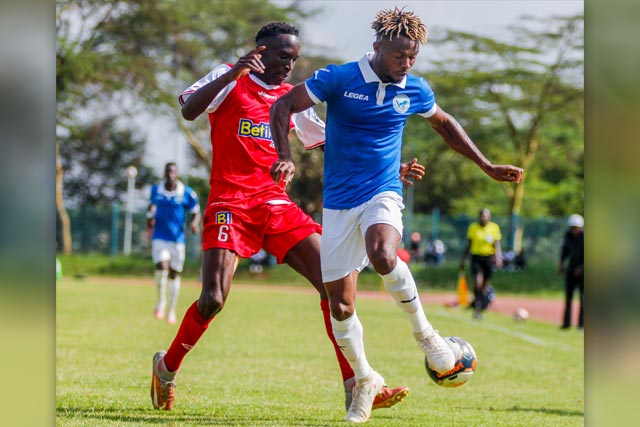 In a match staged at Kasarani Annex, Police were the better side in the opening half, pulling strings and attacking after attack, and Patillah Omotto almost broke the deadlock in the opening quarter of the match. The midfielder collected Regean Omondi’s pass, but he failed to direct the ball at an empty net with keeper Mathias Kigonya well beaten.

At the half-hour mark, Titus Achesa put Roddy Manga through on goal. The striker calmly controlled the ball onto his feet before shooting a long-range volley, only for his efforts to go a few inches wide.

Moments later, Ambrose Sifuna floated in an inswinger that found Davis Kasiyre; the forward dashed past Harun Shakava, but his diving header caused no trouble for an easier pick for Job Ochieng in goal for the Police.

At the stroke of halftime, Marvin Nabwire and Duke Abuya had a perfect combination in Sofapaka’s defense. The ball was skilfully chipped past Nshimirimana, but Okola made a quick rush into the box to make an important goal-line clearance as the two sides headed for the break goalless.

On resumption, Police were the brighter side yet again, and their efforts bore fruit five minutes after the restart. Substitute Elvis Rupia broke the deadlock, sneaking past Stephen Okola and David Nshimirimana to head in past Kigonya for the opening goal of the match.

On the hour mark, coach David Ouma made a double change, bringing Kevin Okoth and Geoffrey Ojunga into the fray to help salvage the situation, which instantly changed Batoto Ba Mungu’s attack, which saw Batoto Ba Mungu pin the law enforcers largely on their own half.

Twenty minutes from time, another substitute, Nixon Omondi, had a good build-up, combining well with Titus Achesa on the left flank. His low, hard pass found Manga, but the striker failed to direct the ball past Job Ochieng after his touch had too much power, only to see his efforts go wide.

But after constant pressure on goal, Roddy Manga finally scored to level the scores ten minutes from time. The forward made a swift run past Harun Shakava before rising high and calmly heading past Job Ochieng.

Against the run of play, Kevin Okoth found Geoffrey Ojunga with a pin-point pass, but the midfielder’s hard shot slightly missed the target as the two teams settled for a point each.