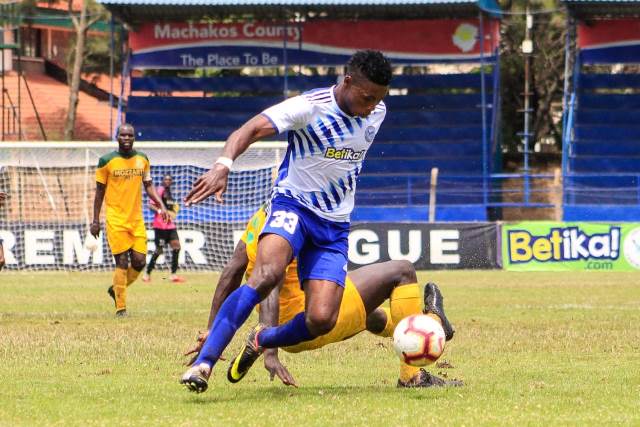 Promise Chinonso was on target scoring a brace in our emphatic 3:1 victory over Gor Mahia on Saturday 8 February.

Speaking to the club’s media, Promise  expressed his delight scoring a brace and described Elli Asieche as “Kevin De Bryune of Kenya”.

On beating Gor Mahia,” we are and particularly am delighted to have helped the team beat one of the biggest clubs in East Africa. It was a huge win for us as a club because we really needed it. We knew it was going to be a tough match but we prepared well, worked on our weak areas and studied their areas of weakness. We simply followed our coaches instructions and the result speaks for it.”

On whether it was surprise beating Gor Mahia,” in football there are never surprises, it’s always down to how you prepare for match and execute your game plan. We played according to our game plan and it worked for us.”

On scoring a brace against Gor Mahia,”it’s a nice feeling for sure, I feel great having scored them, I’m glad because it has boosted my confidence being my second match and I was able to score two. It’s a good feeling indeed.”

On scoring fastest goal for the club, “I’m happy to have achieved a fete that is hard to come by. It feels good to have scored within 23 seconds of play, it helped us settle in the match and contributed to our win overall.”

On Elli Asieche’s contribution, “He’s a special player, for me he’s Kenyan version of ‘Kevin De Bryune’  very intelligent on the ball and whenever he has the ball we know how to just position ourselves because he delivers to you to finish off. I wish him the very best now and in the future.”

On whether we stand a chance for the title,” football is a game of numbers, for you to be a champion you must win your matches and score as many goals as possible. We are not off yet, we are 14points off the top spot and we got 12 matches to go. It’s down to ensuring we collect maximum points in each match without focusing on our competitors. I believe we can achieve it.” Concluded Chinonso.

Promise will be hoping to continue with his goal scoring touch when the club takes on Balaji EPZ in FKF Betway Cup tournament.