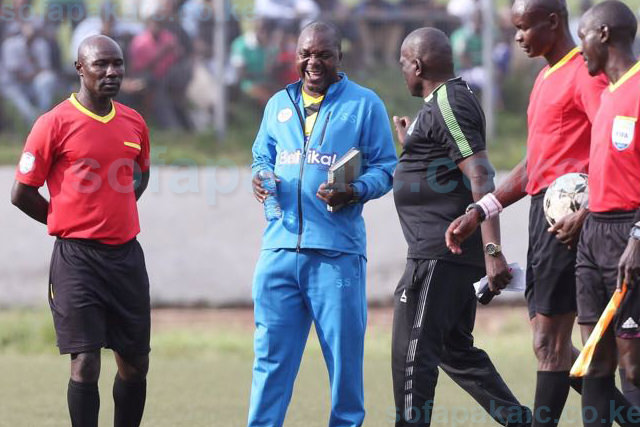 He is a tactician who needs no introduction amongst Kenyans due to his enviable feat of ruling the football coaching landscape like a colossus.

His attributes are discernible so much so that they have endeared him to many football clubs across the region and which have produced players of international repute, among them our own Sofapaka FC.

Meet Sam Ssimbwa, the affable Ugandan tactician who is on his second stint at Sofapaka and whose expertise has made Batoto Ba Mungu  a marvel to watch in the ongoing Kenyan Premier League (KPL).

Ssimbwa who will turn 51 on December 13, 2017 can aptly be described as a man who is a firm believer of giving credit where it is due as he categorically asserts that KPL is the most competitive league in the east African region, hence his decision to cross over into the country from his native Uganda.

“For sure, KPL is a cut above the rest in the region and players in Kenya have the right physique, are talented and above all possess the requisite discipline to make it far in the game. Unlike other countries where top clubs hold monopoly, things are different here in that rank outsiders can beat fancied opponents at any given time,” offers Ssimbwa.

He expounds with a pinch of example “By this, I mean a team like Thika United beating Gor Mahia which is healthy for the growth of the game since it will make the league more competitive.”

Like many successful coaches around the globe, Ssimbwa is averse with youth football that yields quality football at the senior ranks having previously handled Uganda who have had a success story in the regional championship.

He was the head coach of the Baby Cranes during the under-20 tournament held in Kenya in which the latter won 2-1 in the final held at the City stadium.

Then between 2005 and 2006, Ssimbwa was the understudy of Egyptian Mohammed Abbas in the junior team that produced several players in the senior team.

He was then contracted in a similar position in 2007-2008 working under German Csaba Laszio with his coaching star rising by the day.

Going back to his playing career, Ssimbwa starred for Ugandan age-group teams from under-14, 1under 16, under-18 before rising through the ranks to don the national team colours.

Curiously, Ssimbwa was in the crack Uganda Cranes side that won the Cecafa Senior Challenge Cup in 1989 and was a year later voted the best winger during the championships held in Zanzibar in which Uganda won a gold medal.

Later on in 1992, Ssimbwa was in the dreaded KCC squad that beat Kenya’s Rivatex 3-2 in an invitational match in Kampala in which the Kenyan team then featured the late Alfayo Odongo, Riverance Nangalama, Tom Rero, Charles Bwire Namudeche and Patrick Nachok.

Ssimbwa reminisces some of his breakthroughs in his coaching careers including almost spearheading Rwanda’s Atraco to the group stage of the Africa Champions League where they were edged out by a Tunisian club.

“We held them (Tunisians) to 2-2 draw in Kigali and the return match in Tunis ended 1-1. It was just hard luck but I believe reaching that stage was an achievement in itself,” says Ssimbwa.

Nicknamed Mulangira (which means Prince) in his native Uganda, Ssimbwa’s other pride come in form of propelling Sofapaka to a third place finish at the Cecafa inter-club championships in Rwanda in the year 2000. Besides winning two trophies with Express and one with KCC in the Ugandan league, he reckons that he would like his son Prince Nakibinge Willy Bulasio who he has been named after his father to take up football seriously and emulate him.

However, above all, Ssimbwa said his burning desire is to make Sofapaka one of the best teams not only in East Africa but Africa as a whole.

“I must say I’m leaving nothing to chance to make Sofapaka the darling of Africa.  The fans should keep on supporting us and the desires results will come,” said Ssimbwa.

He also had a chequered career at Ugandan national team, The Cranes winning several honours.

Ssimbwa’s thirst for coaching also took him to Rwandan side Atraco (2006), Express Fc (2007), Tanzanian Simba (2008) and is currently attached to Kenyan club Sofapaka.

Since November until December 2012 he coached the Somalian national football team and was previously the coach of SC Victoria University.

He would later be hired by Express FC before testing waters at Rwandese club Police FC.