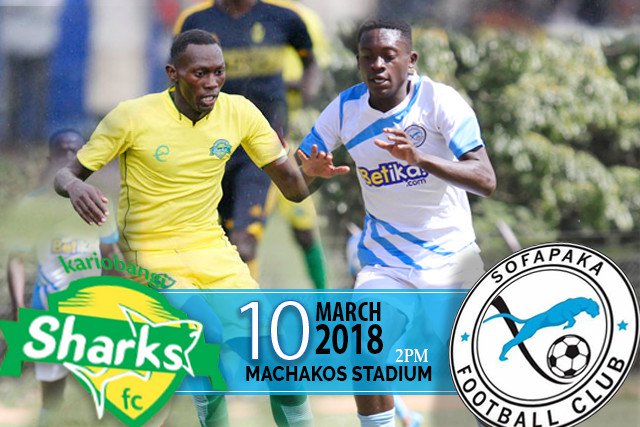 After making a huge statement of intent by blitzing Posta Rangers 2-1 in their latest fixture, Sofapaka will be angling to stop Kariobangi Sharks in yet another tricky Kenyan Premier League (KPL) fixture at Kenyatta Stadium in Machakos on Saturday, March 10, 2018.
The first match of a double-header at the stadium has all the ingredient of a thriller since it brings together some of the battle-hardened teams in the country.
Curiously, the interesting bit of it is that Sofapaka players Elly Asieche and Ibrahim Kitawi, who were off-loaded by Kariobangi Sharks last season, will be facing their former employers and would be more than eager to show them just what they are missing.
That said, Sofapaka Coach Sam Ssimbwa averred that the laboured win over Rangers gave his charges lots of confidence, adding that they are determined to leave no stone un-turned in subsequent fixtures.
The tactician observed that he does not see Sofapaka facing a “Shark Attack’ considering that he understands their opponents style of play like the back of his hand.
“I know Sharks’ strong and weak points and I must say we are ready for them. They may be a tough side but we’ll give them a good match in our quest to bag the three points,” observed Ssimbwa.
During the match against gritty Rangers, Sofapaka were a marvel to watch and whether they will replicate the same remains to be seen.
Stephen Waruru who was amongst the stand-out players in the match is expected to lead the goal-hunt assisted by Kepha Aswani and Umaru Kasumba.
In midfield, Hillary Echesa is expected to take a commanding role with Maurice Odipo leading in keeping the defence together and most importantly shielding goalkeeper Mathias Kigonya from the predatory Sharks front-runners.