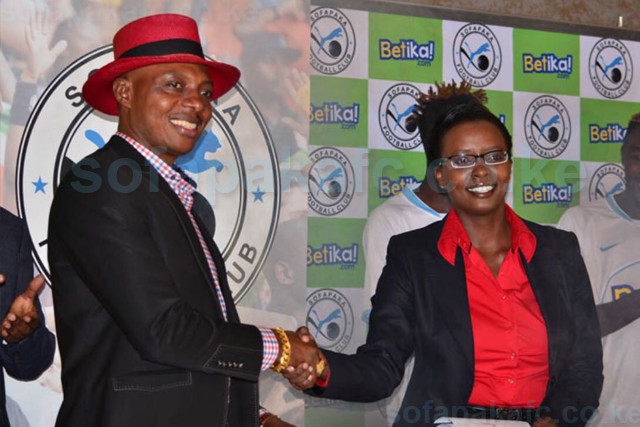 It seems like its a common club for the common eye, Sofapaka is that club which came to the Kenyan Premier League (KPL) in 2009 and within its first few months sidestepped the known giants to win its maiden league title, at the first attempt. But the journey has been longer, the terrain ragged and treacherous.

Founded in 2002, Sofapaka’s story is that of rags to riches, having grown from humble beginnings as a church team serving in the men’s ministry at MAOS Church, and majorly used to spread the gospel through sports. The team, whose membership in those early days had strong Congolese roots, took part in the inter-church competitions and at some points ventured in other tournaments, earning it the nickname Batoto Ba Mungu (Children of God).

Elly Kalekwa, the club’s current chairman spotted the potential in the church team and being a football fan, took it over in 2004 and renamed it Sofapaka, an acronym of SOte kama FAmilia kwa PAmoja Kuafikia Azimio translated as all of us in unity as a family to attain the set goal. Kalekwa registered it in the lower leagues and two years later, in 2006, saw the team earn promotion to the second tier, then known as the Nationwide League and managed through with the obvious financial struggles at a time there were no sponsors in Kenyan football.

“It is hard running a club in Kenya today even with the sponsorships and money invested in the game, so you can imagine how tough it was back then. We didn’t have much money then and it took a lot of sacrifice to honor matches and keep the team together,” Kalekwa says.

Under his leadership, when still in the second tier, Sofapaka won its first piece of silverware in 2007, the President’s Cup (currently known as GOtv Shield) and by that earned the chance to represent Kenya in the CAF Confederations Cup. However, due to financial constraints the club had to pass the chance of taking part in the continental competition.

A year later, 2008, the club would celebrate yet another milestone; after a splendid show in Zone B of the second tier, it gained promotion to the top flight – the Kenyan Premier League. Leon Diallo is among the longest servants at the club. A member of the playing unit from its formation, he retired to join the technical bench and has since served as Team Manager, Goalkeeper Trainer and currently is the Fitness Trainer.

“To those of us who were with the team through its lowest moments, getting to the Premier League was the greatest thing to happen in our lives. When playing in the lower tiers we always bore the dream to get to the top flight and here we had the chance,” Diallo says.

Promotion to the top flight came with its fair share of blessings for the team – what then was a lucrative sponsorship from East African Portland Cement, and the obvious exposure with SuperSport airing matches were enough motivation for the players.

The financial muscle at the club saw the team swoop for some of the best players in the country and even went shopping around Africa, signing from as far as Zimbabwe, and the team’s superiority was clear as they finished the season six points better of defending champions Mathare United, to clinch the league title in their first season in the top flight.

The gains from the first season saw the team earn a place at the CAF Champions League and the CECAFA Kagame Cup. While the Champions League proved to be a cut above the team, the then Kenyan champions showed they can pull their weight against the regional giants. “A year into the top flight, I had seen the growth I wanted in this team; winning the league at the first attempt with our inexperience was not a mean feat. We also performed well outside Kenya’s borders and I couldn’t ask for more from the boys,” Kalekwa notes.

Sofapaka, coached by Robert Matano, was eliminated from the Champions League at the first hurdle in 2010, by Egyptian side Ismailia with a 0 – 0 draw at home, having lost 0 – 2 away.

Heading to Rwanda for the Kagame Cup in June, Ugandan Sam Ssimbwa was in charge and drove the team to finish third, behind winners APR and Ethiopian side St. George.

The team won its second President’s Cup title in 2010 earning a spot at the 2011 CAF Confederations Cup. This time, experienced at continental competitions, having participated in the Champions League in 2010 they went on to fell established giants, including Ismailia, whom they thrashed 4 – 0 at home after falling 0 – 2 away in Egypt.

Their journey was cut short at the fourth round after falling 3 – 4 on aggregate to Tunisia’s Club Africain, having managed a 3 – 1 win at home, after losing 0 – 3 in Tunis.

That low was a precursor of the tough times ahead at the club as the sponsors, East African Portland Cement Co. Ltd, started experiencing financial difficulties and the money was no longer trickling down to the club. What followed was a spate of poor results, by the team’s standards and a mass exodus of players. Matters worsened when the sponsors notified of officially pulling out at the end of the 2012 campaign, signaling even harder times.

Kalekwa had to personally fund the team but even with the challenges, Batoto Ba Mungu still managed to vie for top honors.

“Blue Triangle pulling out was a massive blow for us; we had just spent a huge amount in the Confederations Cup and business was not doing well so to hear they were leaving was hard. Still we had to encourage the players and push them to do well with the little we had,” he adds.

Under another Ugandan coach, Sam Timbe, the team added to its cabinet the 2014 GOtv Shield after a fine run in the year that also saw it finish second in the league after pushing the title chase with Gor Mahia to the final day. With a pile up of unpaid dues, Timbe left the team midway through the 2015 campaign, leaving his assistant David Ouma in temporary charge and the growing weakness of the team showed. Though the side managed to finish third in the season, for the first time in its time in the top flight it registered a zero goal difference, having scored 39 goals and conceded the same number.

The team hit rock bottom in 2016, when at the start of the year top striker John Baraza announced retirement from football and a horde of players left the team, with only Heritier Luvualu, the late Evariste Mutuyimana and Wycliffe Opondo staying loyal. Perhaps the only soothing news at the team then was that Baraza would stay on, to serve as deputy coach under David Ouma, who had now been confirmed as head coach.

The club went on a recruitment spree, but with the financial struggles, it could obviously not attract top players – a first in Sofapaka’s history in the premier league. The only motivation for the players joining was getting exposure in the top flight and that is the only carrot the club could dangle. That season bore the saddest memories; for the first time the club finished outside the top four, and not just that, the inexperienced players failed to cope with their mates in the league and by the 10th match of the season, the team was firmly in the race as a relegation candidate.

It took a change of personnel, complete overhaul of the team in mid season, with only John Kelwish staying on, from the playing unit that featured in the first leg. Still, the damage did in the first leg was too much and the team needed a change in the technical department – Baraza taking over from Ouma with four matches remaining – and a win over Thika United in the last game of the season, coupled with Ushuru FC’s loss to Posta Rangers, for it to stay up.

“2016 was a very tough year; for the first time since forming the team, we had to fight relegation; I never imagined we could get to that point but I’m thankful to all who made it possible for us to survive,” Kalekwa notes.

With the job done, Baraza resumed his roles as assistant coach as the club brought on board Sam Ssimbwa for a second stint but the storm would continue in 2017 as the club was deemed unfit – by the Football Kenya Federation (FKF) – to take part in the premier league, on Club Licensing grounds. That opened a war between the club, backed by the Kenyan Premier League (KPL), and the federation.

It caused delays to the league’s kickoff and found its way in court, only for the Sports Disputes Tribunal to order for Sofapaka’s reinstatement. Kalekwa holds that his club’s tribulations at the time were the manifestations of politics in football; “That was a political statement being made; we are here by merit and it is sad we had to go all the way to court to prove it. That however is in the past and we don’t want to think of it anymore. We have moved on.”

Confirmation of their status in the top flight came with better tidings; the club got its second sponsor in betting firm Betika, financing it to the tune of Kshs 50m for the year and in the mid season transfer window the club was among the busiest, getting the top players and even challenging for the title.

With lessons from the past and huge expenditure in the transfer market, the club has laid an ambitious project, setting up a fully operational junior team and not just one to participate in the KPL U20 tournaments. The junior team is expected to be the feeder for the senior team and to keep the players together, it was enrolled in the Nairobi County League Zone B.

A few players have already been tested in the premier league and youth team coach Edward Munandi acknowledges the move was the best for the club. “When the idea was mooted, it did not sound like it would one day come to fruition, given we also had financial problems and convincing a young player to stay with your team without financial motivation can be a challenge,” he says.

The team is among the top performers in the County League and coach Munandi notes that the biggest motivation his players have, is a dream to one day don the senior team colors.

This works well for him too. “My job is easier because I have fighters here; they know the club model is to regularly promote from this team to the senior team so that is really one thing they work for. They want to play for the senior team and so they have to show it,” he adds.

The growth of the junior team has been aided largely by the good cooperation between Munandi and senior team coach, Sam Ssimbwa, which has seen a number of players who starred for the team in the 2016 KPL U20 tournaments land slots in the senior team. Mohamed Kilume is a regular in the senior team while others who have tasted premier league action include Samuel Mutiria, Brian Magonya, Edmond Kwanya and Ruben Juma.

Kalekwa’s wish is to see the club self-sustainable in future and has globe trotted in search of partners who hold the potential of not only investing in the club but in Kenyan football at large. “When we joined the league, I wanted to see a top flight that has players that are well paid and I used to give lucrative salaries. But many years later we are still not where I’d like us to be and that is why I work hard to take the club to a situation where it can be able to generate its own money.

“I have business dealings with many stakeholders in sports, including in the Major League Soccer (US top flight) and if that can be extended to helping Kenyan football then why not?” he poses.