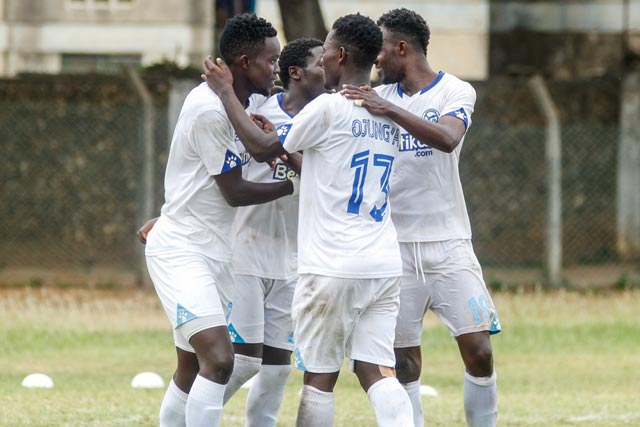 Stephen Okola’s header in the second half earned Sofapaka maximum points in a 1-0 over Bandari Football Club.

The hosts kicked off proceedings and were the better side in the opening stages of the match. The Ugandan goalkeeper duo of Umaru Kasumba and William Wadri worked well together, but David Nshimirimana timed his clearance perfectly.

At the quarter-hour mark, the former Sofapaka forward came close yet again, but his flimsy shot went into Simon Masaka’s arm.
Six minutes later, both teams witnessed end-to-end action from both, but there was no break through from either side.

At the half-hour, Sébastien Sunday found Rody Manga, who made a good sprint past Felly Mulumba, but the striker failed to beat Michael Wanyika.
Five months before the break, Titus Achesa laid in a long ball to Lawrence Juma, but the captain made a quick rush, shooting into Wanyika’s arm as the two teams went for the breather level.

Two minutes after resumption, Lawrence Juma’s corner kick delivery met the on-rushing Stephen Okola, who made no mistake in heading past Wanyika to give Sofapaka the lead.

At the hour mark, Sébastien Sunday, Rody Manga, and Joe Waithera all team up in Bandari’s penalty area. The latter made a cutback pass to Ojunga Geoffrey, but the midfielder’s attempt went wide.

Twenty minutes from time, Joe Waithira made a great sprint past Brain Otieno into the hosts’ defense area before setting Roddy Manga on goal, but the striker failed to hit past Wanyika in a one-on-one situation.

With a quarter of an hour to play, Lawrence Juma almost doubled Batoto Ba Mungu’s lead after receiving a fine delivery from Ambrose Sifuna, but Brian Otieno was well placed to deny the captain from close range.

Against the run of play, the hosts put more pressure upfront with attack after attack, but Sofapaka held firmly to collect maximum points on the road.