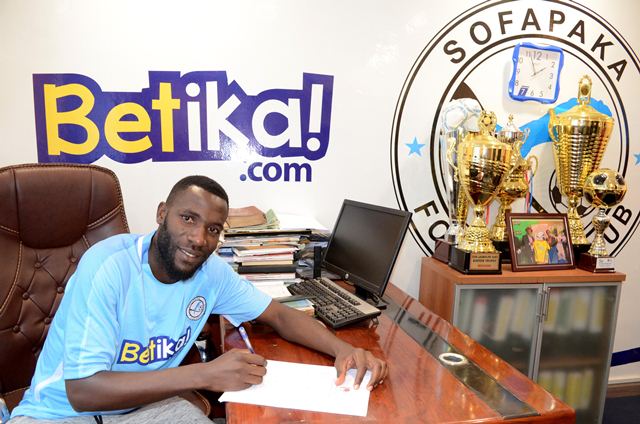 Sofapaka would like to confirm the signing of five Ugandan players added on to the roaster for the 2019/2020 season. The five are goalkeeper Jimmy Kanakulya from Bright Stars, midfielder Mohammed Kasirye from Paidha Black Angels, Allan Katwe from Nkumba University, striker Peter Lwasa from URA FC and defender Musa Malunda from Bul FC.

The players penned their contracts at the club offices on Tuesday afternoon having trained with the club under the watchful eye of head coach Divaldo Alves for the entirety of last week.

Here is they had to state after penning their contracts with the club:

Kanakulya: “I feel really privileged to sign for this great club and so far so good. I have trained with the rest of the guys and I feel welcome here. The challenge is great but I am ready for the task. I know I am coming in to fill huge boots but I will do my best to ensure I continue with the good work,”

Kasirye: “Coming into a different country requires me to work harder and prove that I should be playing here. I am ready to compete and having seen the team in training for the past week, I know the amount of work awaiting me is not small. My target at Sofapaka is to play well and win trophies,”

Katwe: “It has always been my desire to play outside Uganda and getting this chance with Sofapaka is a huge thing for me. It is a good club with good coaches and the work starts now. I have to prove that I deserve to be here,”

Musa: “I have played at Vipers before going to Bul and I won two league titles there as well as the Uganda Cup. I want to transfer the winning mentality to this club and win trophies as well. I know that it has been long since the team won a trophy but this season, I want to work hard and help the team win.”

NOTE: Defensive midfielder Katwe, 26, has a Bachelors Degree in accounting and a Masters in Finance and Accounting from Nkumba University which sponsored his education while he played for them.

The five will add on to the local steel already settled in at the club including midfielder Cersidy Okeyo (Gor Mahia), Brian Nyakan, Timonah Wanyonyi (Mount Kenya United) and Philip Muchuma (Chemelil Sugar).