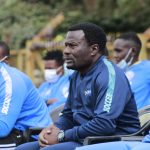 Sofapaka will once again be at home to welcome bankers KCB in round four of the FKF Premier League fixture.

While addressing the clubs media,head coach Ken Odhiambo is upbeat ahead of bankers tie despite uncertainty on the availability of the new signings. This what the boss had to say;

On first defeat of the season
“We had a poor start into the game and our opponents took full advantage of our mistakes. Mathare loss was an easy one, I feel the players didn’t follow instructions and that costed us the match.”

On KCB duel
“It’s a normal match just as the rest, we’ve always had a close and exciting encounter between us and I expect the same come Sunday. We respect our opponents but we equally want to get something out of the match and the aim is clear that’s the three points.”

On preparations
“We had no time to rest after our first defeat of the season. Our preparations has been well and the players are equally looking syked up for the match. We remain hopeful that all we have worked on shall be implemented on match day”.

On the impact of missing out on the services of new signings
“It’s a frustrating situation because we can’t get to use some of our new players who are so key to us. The absence of the new recruits has costed us the last two fixtures and we only hope it’s sorted out soon”.
The boss concluded his presser by giving his sentiments on team news; “We have no injury concerns, we have a clean bill of health and we are good to go come Sunday.” 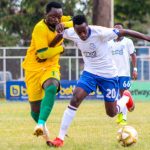 Mathare United kicked off the match on a high tempo for an early opener. Their attempts bore fruit thirteen minutes into the match after dangerous corner kick delivery by Martin Ongori landed on Danson Kago’s path, the midfielder made no mistake to give the slum boys the lead from a close rang tap in.

Two minutes later Danson Kago was at it again. The former Sofapaka player doubled Mathare’s lead once again picking the ball from a poor clearance at the back to net in the second of the day for coach Ezekiel Akwana coached side.

At the half hour mark of play Sofapaka pushed yet again and almost came close to scoring. Joe Waithera laid through Titus, the defender beat Meya off the ball took a low strike but Ochieng was keen punching off the attack.

Upon resumption for the final half, Sofapaka picked up from where they had left it for the breather, Alex Imbusia and Ambrose Sifuna made a good combination upfront, Imbusia would then take a hurried shot only to miss the target by a whisker.

On the half hour mark after a series of attempts Sofapaka final had their search pay off after Alex Imbusia was brought down in the penalty area. Joe Waithera stepped up and made no mistake slotting in past Job Ochieng to reduce the deficit.

Ten minutes later David Kingatua crossed in a checky ball on goal, David Nshimirimana dashed in but his header attempt lacked enough power for an easier pick for Job Ochieng

Against the run of play Sofapaka pushed bodies upfront in a bid to score the equalizer but a resolute Mathare United defense kept intact to collect the maximum points. 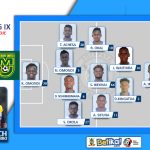 We host Mathare United fc at Thika stadium on 20th October 2021 for our round three match FKF Premier League. And this is how we lineup to face them, as headed by our coach Ken Odhiambo. 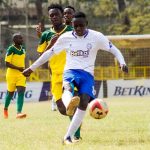 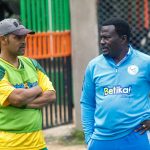 Sofapaka will on Wednesday host slum boys Mathare United in a mid-week clash.

Ahead of matchday three fixture, head coach Ken Odhiambo has expressed confidence in bagging maximum points, and here is what the boss had to say;

On a point away in Bungoma
“It was a difficult outing in Sudi on Friday but we are thankful we collected a point on the road. We experienced challenges yet again having to field 13 players due to the current ban we are facing but am glad the players gave their best. ”

On facing Mathare United
“It’s always an exciting match and opponent to face, we are well prepared for the encounter and we are all but geared up to take on the slum boys on Wednesday.”

On availability of new signings
“It frustrates not to have a complete squad and key players available for selection. We have gone two matches without a complete squad due to the FIFA ban we are currently facing but we have done all that is needed from our end to enable us to get cleared. We only hope a swift response comes through ahead of Wednesday’s fixture.”

On season’s target on track
“Absolutely yes our targets are well intact because we are only two points off the top spot. Mathare clash offers a clear opportunity for us to move with reach and we only want to ensure we collect maximum points out of the match.”

On latest on team news
“We are thankful we have a full house with us, no major injury concerns except for a few knocks which we are hopeful will be shaken off by Wednesday.” 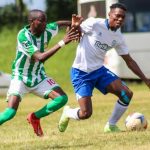 Hosts Nzoia Sugar was held to a barren draw by Sofapaka in an early FKF Premier League kick-off match in Bungoma.

Sofapaka kicked off proceedings with an early attempt on goal through David Kingatua. The midfielder made a quick run into the miller’s defense beat Mahiga Denis but his final attempt on goal

Five minutes later host came close through Gaetan Masha, the striker hit a hard on goal but Kevin Omondi reacted just in time to save out danger

At the quarter-hour mark, Sofapaka pushed for the opener and almost net the first of the game. Titus Achesa weighed in a sumptuous delivery to Joe Waithera, the midfielder chest in through goal but Mahiga swiftly reacted to clear out the danger.

Six minutes on Nzoia came blazing and almost took the lead after two twin dangerous attempts by Gaetan Masha and Kevin Juma but Omondi was up to the task to keep BatotoBaMungu from going behind.

At the half-hour mark, Sofapaka had another beautiful chance to take the lead through Kingatua, the midfielder had his volley punched out by Katas.

Upon resumption Nzoia came back the strongest in the quest to get the early opener, Denis Mahiga and Titus Kapachang linked up well on goal but Kapachang’s final ball lacked enough power for an easier pick for Kevin Omondi.

On the hour mark, Alex Imbusia made a swift run on goal, beat Kevin Juma hurriedly took his shot only to go out for a goal kick

Twenty minutes from time hosts Nzoia Sugar made another goal attempt, substitute Collins Wakhungu from a 25-yard range curled in a dangerous ball that beat Omondi on goal only for the ball to hit post much to Sofapaka’s relief.

Against the run of play Sofapaka had one of the glorious opportunities in the game, Roy Okal laid Joe Waithera on goal, the forward beat two Nzoia defenders but his goal-bound shot hit Kevin Juma’s thigh to goal out for a corner.

Waithera’s miss marked the last bit of action as the two teams shared the spoils Sudi. 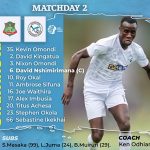 We play against Nzoia fc at Sudi stadium on 15th October 2021 for our round two match FKF Premier League. And this is how we lineup to face them, as headed by our coach Ken Odhiambo. 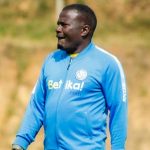 Odhiambo’s press briefing ahead of the Nzoia Sugar match.

Ahead of the resumption of league action after a three-week-long break, Sofapaka will be hoping to kick-off matchday two on a high when they take on hosts Nzoia Sugar.

Ahead of the early kick-off fixture slated for Friday 15th, head coach Ken Odhiambo faced the club’s media and this is what he had to say:

On matchday one win
“Win over City Stars was a massive and positive start into the season for the club, we planned and executed our tactics well and the results spoke so despite not having a full squad with us. It’s important to have a strong start because it gives you the proper plan into the following fixtures.”

On new signings
“We had to face our opponents in the opening day with partly 14 players available due to the transfer ban we are facing. We have very exciting and talented new players with us we have done our part per FIFA’S requirement and we only remain hopeful we shall have all our new signings available for selection on Friday.”

On facing Nzoia Sugar
“We up against a tough opponent especially when they are playing at home.
It’s going to be a massive test on our character and a test to our impressive start into the season.”

On consistency
“This season we have our work well cut out and one of the areas is to keep up with good results and that only means consistency will be so integral for us.”

On a must-win encounter;
“The match will be a tight one no doubt but we are going into the clash with a clear mindset to collect positive results. It’s always a desire for every coach and team to win their matches. Nzoia match will be another test and we only want to keep the winning momentum with us.” Concluded the boss. 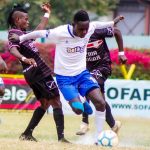 FKF Premier League action resumes after a three-week break. Ahead of matchday two, Sofapaka will take on Nzoia Sugar in an early kick-off at the Sudi Stadium.

BatotoBaMungu who come from a massive win over Nairobi City Stars will be hoping to make it two in a row but will have to face a tough test when they play millers who have always proved hard to break in Sudi.

Last outing
In the reverse fixture in Ruaraka, Lawrence Juma’s screamer proved the difference as Sofapaka defeated the millers by a 1-0 scoreline.

Form
After matchday one fixture, Sofapaka sit second on the log after an impressive 3-1 win over City Stars, while Nzoia Sugar are placed 14th having gone 1-0 down against Ulinzi Stars

Numbers
In the recent ten league encounters, Nzoia and Sofapaka have won three and four matches respectively while the other three fixtures ended in draws.

The match is scheduled for Friday. 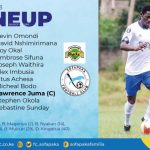 We play against KSharks fc at Utalii grounds on 22th August 2021 for our round 33 match FKF Premier League. And this is how we lineup to face them, as headed by our coach Ken Odhiambo.