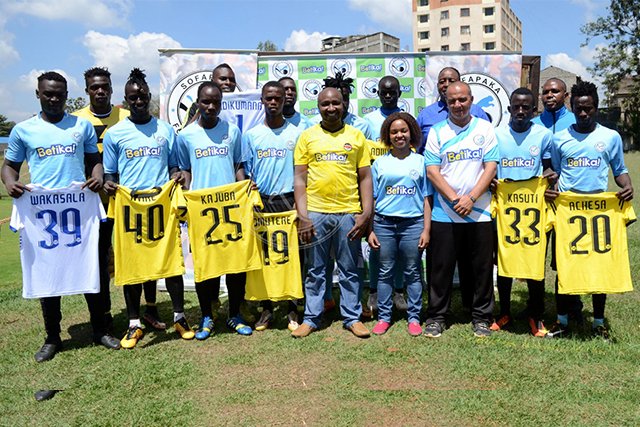 Sofapaka FC has this afternoon unveiled 11 new players ahead of the new season. The ceremony took place at the club’s training ground where they were formally introduced to the media and officials.

General Manager Jimmy Ambajo says the management is confident in the players picked by the technical bench to steer the team over the new season and has promised support as the fight to win the 2018/2019 Premier League kicks off this weekend.

“We welcome all the new players into the team and we believe that they are the best the team could get. We are happy that our team is stronger and this season we need to fight for that title. We are behind you and will give you all the necessary support,” Ambajo said.

Also present for the short ceremony was also attended by sponsors Betika.

Marketing Executive Juddy Muchiri said; “We are happy to be associated with Sofapaka. We are happy with the success that you have had and we promise to continue supporting you through the new season.”

Speaking on the new players who he has brought in to strengthen the team, head coach Melis Medo was full of praise for their attitude and is optimistic they will be a hit with the team.

“We went in to get players on areas we thought we were not very strong. We needed to have a lot of depth because this is going to be a very long season because it’s short and quite compressed. I am happy with the players and how they have trained. Of course some of them will play on Sunday but we should expect to see a stronger Sofapaka playing beautiful football,” the tactician stated.