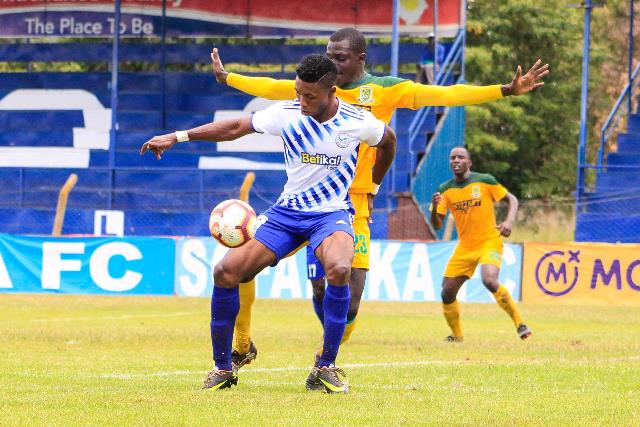 Sofapaka and Mathare United played out to a one all draw in a Kenyan Premier League match staged at Kenyatta Stadium, Machakos.

In early kick off, we started strongly and looked more lively of the match but our opponents defended well to keep the goalless score line. New signing Promise Chinonso was largely a threat linking up well with Jedinak Ameyaw, Ameyaw hard on shot missed the target rolling out for  a goal kick .

In the 25th minute our visitors almost drew the first blood, a quick attack involving Kinyanjui and Otieno proved a threat, Otieno’s final touch on the ball let him down with shot being picked up by keeper Aimo Richard.

We came close yet again through Kayanja, the Ugandan headed in from a tight angle only to narrowly miss with keeper well beaten.

On resumption, our rivals took an early lead in the 54th minute through Daniel Lual who headed in Kinyajui’s corner-kick delivery.

In what seemed to be going Mathare’s way, Nigerian forward Jedinak Ameyaw drew us level tapping in from Asieche Elli’s cut in delivery.

We shall host Gor Mahia on Saturday 8th February